Inflation is here and it's going to get worse, Jim Rogers warns

Energy and technology shares led the S&P 500, which tumbled Wednesday by the most since February. The tech-heavy Nasdaq 100 outperformed the broader index, suggesting a market recovery is gaining momentum, after a bruising week that saw gathering price pressures hit equities. Both indexes still finished the week in the red. An advance in European stocks was led by cyclical industries. MSCI Inc.’s Asia-Pacific share gauge advanced more than 1 per cent.

“People are very optimistic economically,” said Simon Maughan, head of trading alpha at Liquidnet. “Between now and the end of the year, the market is still on the upward trajectory. Clearly sentiment is extremely optimistic about pent-up demand.”

Markets appear to be regaining their equilibrium at the end of their biggest retreat in 11 weeks, with the focus of the benefits of an economic rebound overriding worry about the negative side-effect of inflation, for now.

The Federal Reserve’s policy is in a good place right now, said Cleveland Fed President Loretta Mester, while playing down signals from data that she warns will be volatile as the economy reopens. 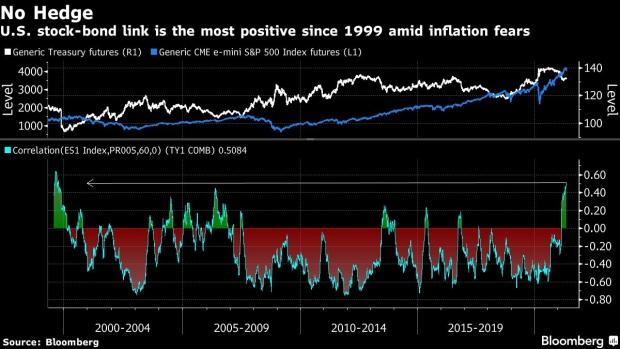 That may help to reinvigorate the reflation narrative of picking value shares tied to economic growth over pandemic stay-at-home favorites. Walt Disney Co. fell after results that showed a faltering in growth at streaming service Disney+.

Treasuries gained after a report showed U.S. retail sales stalled in April following a sharp advance in the prior month. The dollar remained weaker against all of its Group of 10 peers.

“The disappointing retail sales numbers shouldn’t really come as a huge surprise given that last month encompassed stimulus money hitting bank accounts,” said Mike Loewengart, managing director of investment strategy at E*Trade Financial. “It probably supports the point of view that the dip we experienced this week is a buying opportunity as all sectors march toward full recovery.”

Iron ore continued its fall from a record amid efforts by China to clamp down on surging prices, with the metal set for the biggest two-day plunge since 2019. Oil erased an earlier decline, paring its weekly loss.

Bitcoin traded above US$50,000, reversing some of its slump on Tesla Inc.’s decision to suspend purchases using the digital currency.