Expect markets to be volatile on a daily basis to any Omicron news: Christine Poole

Stocks sank after Federal Reserve Chair Jerome Powell weighed an earlier end to bond tapering, with traders boosting their wagers on the pace of interest-rate hikes.

In a wild trading session for markets, the Treasury curve flattened sharply -- with the premium of the 30-year rate over the five-year yield tumbling. Powell also told a Senate banking committee that it’s time to stop using the word “transitory” to describe inflation. The S&P 500 slumped almost 2 per cent, while the Cboe Volatility Index extended its biggest monthly surge since February 2020.

“Powell just added gasoline to the fire by finally admitting that inflation isn’t going away as fast as anyone would like,” said Ryan Detrick, chief market strategist at LPL Financial. “A faster tapering is probably coming as a result, and that has markets worried the punch bowl is leaving the party.”

Money markets now show 55 basis points of rate tightening -- more than two standard quarter-point increases -- priced in by the end of 2022. That’s up from about 50 basis points on Monday. The first full hike remains priced for July. Fed officials have consistently said they want to wrap up the taper before lifting borrowing costs from near zero -- where they’ve been since the pandemic began. 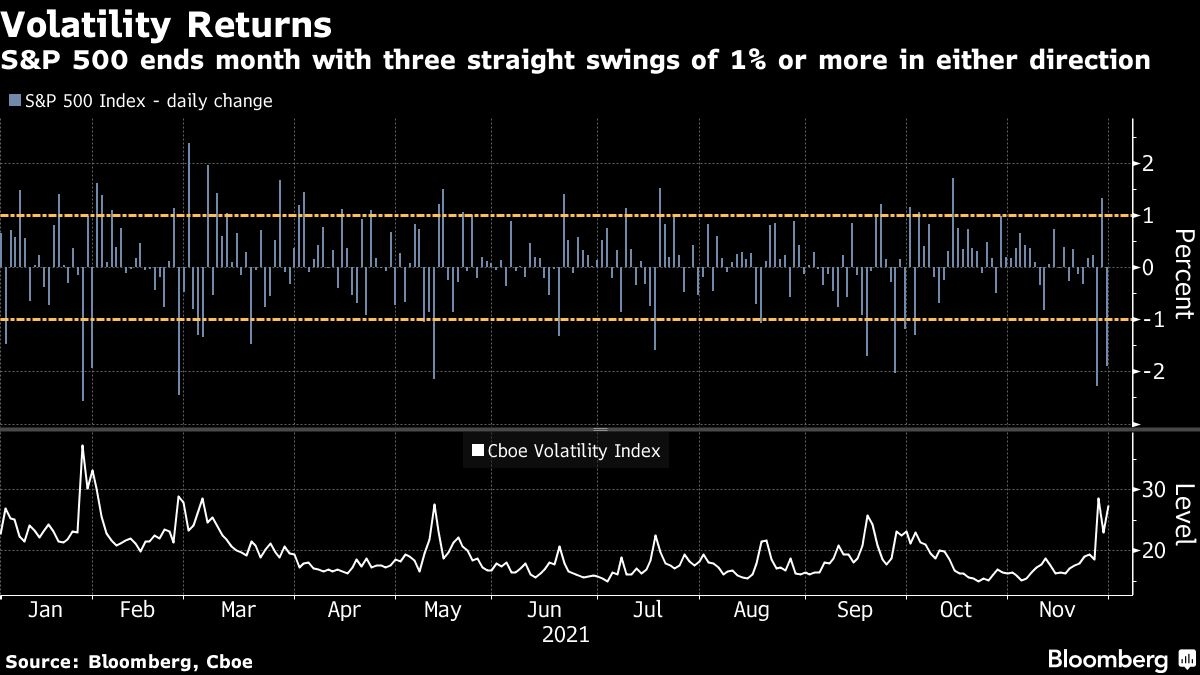 Powell, in his opening remarks, said the recent rise in COVID-19 cases and the emergence of the omicron strain pose “downside risks to employment and economic activity and increased uncertainty for inflation.” During the following question-and-answer period, he focused more on the evidence of elevated prices since officials met Nov. 2-3.

Concern about the impacts of omicron weighed on markets earlier Tuesday, with Moderna Inc. executives saying the many mutations suggest new shots will be needed. The current generation of vaccines probably will protect against severe disease in people infected by the variant, according to BioNTech SE’s chief. The University of Oxford said there’s no evidence existing shots won’t provide some protection against the strain.

U.S. consumer confidence slid to a nine-month low in November as a pickup in COVID-19 cases and accelerating inflation weighed on Americans’ views about the economy. Final sales for Cyber Monday fell short of estimates as scarce inventory kept shoppers from breaking out their credit cards at the start of the holiday shopping season.