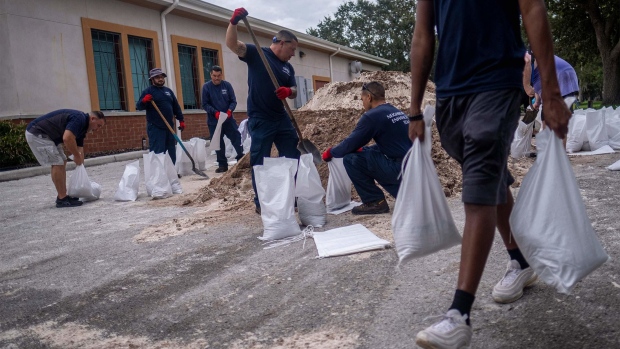 (Bloomberg) -- After raking Cuba early on Tuesday, Hurricane Ian has continued to strengthen as it moved northeast over the Gulf of Mexico toward Florida’s west coast, where it’s expected to make landfall on Wednesday. The huge storm’s winds have reached 155 miles per hour, just shy of Category 5 strength, the most powerful rating for a storm on the Saffir-Simpson scale.

Only four Category 5 hurricanes have hit mainland US in records going back to 1851. Numerous counties in Florida have issued evacuation orders.

On Wednesday morning the storm was on track to make landfall near Fort Myers. The National Hurricane Center warned Wednesday morning that Ian is expected to cause “catastrophic storm surge, winds, and flooding in the Florida peninsula.” The center revised upward its storm surge prediction from Tuesday, with the upper estimate 12 to 18 feet from Englewood to Bonita Beach and in Charlotte Harbor.

Storm surge is a temporary increase in tide levels that happens due to tropical storms like cyclones and hurricanes. Their strong winds push seawater to the coast, leading to severe flooding episodes such as those that followed Hurricane Katrina in 2005 and Hurricane Sandy in 2012. Sea-level rise caused by climate change is making storm surges higher.

Globally, oceans already rose 0.16 meters (6.3 inches) between 1902 and 2015, according to a 2019 report by the UN’s Intergovernmental Panel on Climate Change. Sea-level rise has accelerated in recent decades and the rate of increase between 2006 and 2015 is unprecedented over the last century, scientists say. The Greenland and Antarctic ice sheets are melting faster as the higher level of greenhouse gas emissions in the atmosphere warms the planet’s atmosphere and oceans.

The risk to communities from storm surge is set to grow as Earth heats up and sea levels continue to rise.

In Florida’s Tampa Bay area, storm surge is predicted to reach 4 to 6 feet. Tampa itself is almost completely surrounded by water and is very low-lying: 48 feet (15 meters) above sea level. The last time a major hurricane directly hit Tampa Bay was in 1921. The surge reached 10.5 feet and parts of downtown Tampa flooded. At least eight people died.

Back in the early 1920s, several hundred thousand people lived in the area. Now it’s home to more than 3 million, most of whom live in neighborhoods at risk of flooding. And sea level is several inches higher today, on average, than it was in 1921.

Ian is expected to be one of the costliest storms in the nation’s history, with damages potentially totaling $70 billion. But its precise impacts depend on the location where it makes landfall, said Adam Douty, a meteorologist with AccuWeather Inc.

“Tampa may end up avoiding the worst-case scenario, but it looks like it is going to be pretty close,” Douty said. “By the time it is clear to determine where it is going to make landfall it will be too late to evacuate or make preparations.”