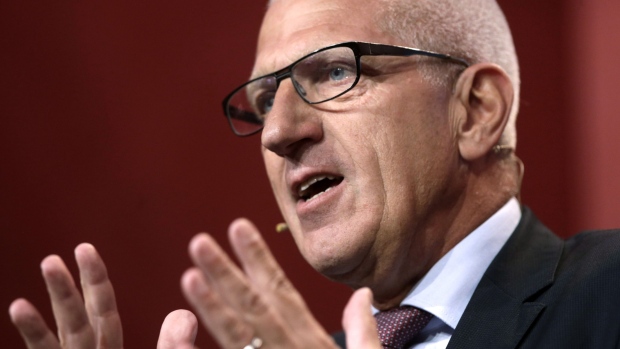 The former head of a Swiss bank goes on trial Tuesday charged with enriching himself and others through millions of dollars in side deals and illegal expenses including racking up a 201,267 Swiss-franc (US$220,000) tab at a string of cabarets, strip clubs and “contact bars.”

Pierin Vincenz, former chief executive officer of Raiffeisen Switzerland, and bank consultant Beat Stocker are accused by Zurich prosecutors of together making unlawful gains of some 25 million Swiss francs. Vincenz illegally skimmed 8.4 million francs from deals he did during his 15 year tenure as CEO, they say.

The total of 560,709 francs in improper expenses that he charged his employer amount to commercial fraud and misappropriation, according to the 365-page indictment. Stocker obtained close to 16 million francs illegally and also ran up nearly 100,000 francs in unlawful expenses, said prosecutors who recommended a six-year prison sentence for both men.

Although Raiffeisen is not listed and is sometimes confused with the larger Vienna-based Raiffeisen Bank International AG, the case has attracted wide attention locally because of the ubiquity of the institution’s brand. Made up of 225 autonomous banks, the red Raiffeisen logo is visible in 800 towns and villages across Switzerland.

In addition to the strip club spending, Vincenz is accused by prosecutors of billing Raiffeisen 251,023 Swiss francs for flights, accommodation and meals with family and friends. He also allegedly charged the bank 3,778 francs for the cost of repairing a hotel room at the five-star Zurich Park Hyatt trashed in 2014 during a “massive dispute” between Vincenz and a strip club dancer he was dating at the time. Then in 2015, according to prosecutors, he billed Raiffeisen 700 francs for dinner and drinks for a woman he met on the dating app Tinder.

Lorenz Erni, a lawyer for Vincenz, declined to comment. Lawyers for Stocker did not return messages seeking comment.

The bulk of Vincenz’s alleged gains, however, came from money he and Stocker misappropriated during acquisitions he oversaw during his tenure as CEO, say prosecutors. Vincenz, now 65, led an expansion of the bank starting in 1999 aimed at bulking up its retail presence against larger rivals Credit Suisse Group AG and UBS Group AG.

That strategy succeeded, insofar as Raiffeisen was classified in 2014 by the Swiss central bank as ‘systemically important’ and therefore subject to tougher rules including a higher capital ratio. But a big part of the growth strategy was building stakes in companies which led to a concentration of top management roles and then rumblings in Swiss financial circles about possible conflicts of interest.

In 2016, banking regulator Finma opened an investigation. Officials were specifically interested in the nature of deals struck through Investnet Holding AG, an investment company Vincenz was buying shares in but which was majority owned by Raiffeisen.  Finma would go on to conclude that Raiffeisen was responsible for “major corporate governance failings” for not adequately supervising Vincenz.

The St. Gallen, Switzerland-based bank declined to comment ahead of the trial. Raiffeisen said it has implemented audit reform measures requested by Finma, which have been reviewed by the regulator and “deemed appropriate.”

In early 2018, Zurich prosecutors opened a criminal probe into those deals and Vincenz was arrested. He was released in mid-June after more than 100 days in custody.  Raiffeisen went on to file a criminal complaint against him and is a private plaintiff in the case.

The trial of Vincenz, Stocker and five other individuals in the case, who can’t be named under Swiss reporting restrictions, is scheduled to run all week.