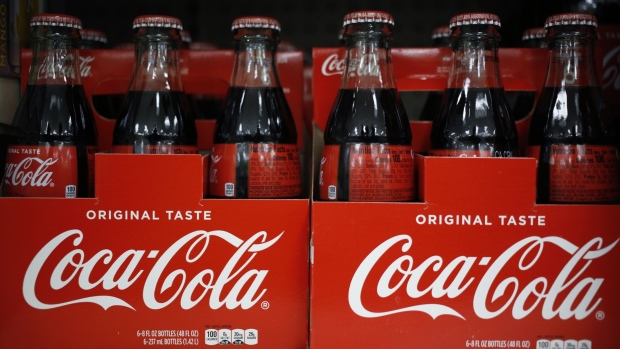 Bottles of Coca-Cola Co. soft drinks are displayed for sale at a store in Louisville, Kentucky, U.S., on Monday, Feb. 10, 2020. Bloomberg/Luke Sharrett

For years, governments, doctors and celebrity chefs tried and failed to get the world to consume less sugar. Then the pandemic hit.

The global closure of restaurants, sports arenas and cinemas means sugar demand will drop this season for the first time in four decades, according to Czarnikow Group. Drink and confectionery sales at giants including Coca-Cola Co. and Nestle SA have fallen, and while economies start to reopen, it’s unclear how quickly demand will recover as incomes and employment fall.

“Consumption out of home is normally more than what you would now substitute and have at home,” said Ben Seed, an analyst at Czarnikow in London. “If you go to the cinema you would probably quite happily have a liter or maybe more of soda while you watch the film, whereas we just don’t think people would drink a whole liter of soda while watching Netflix.” 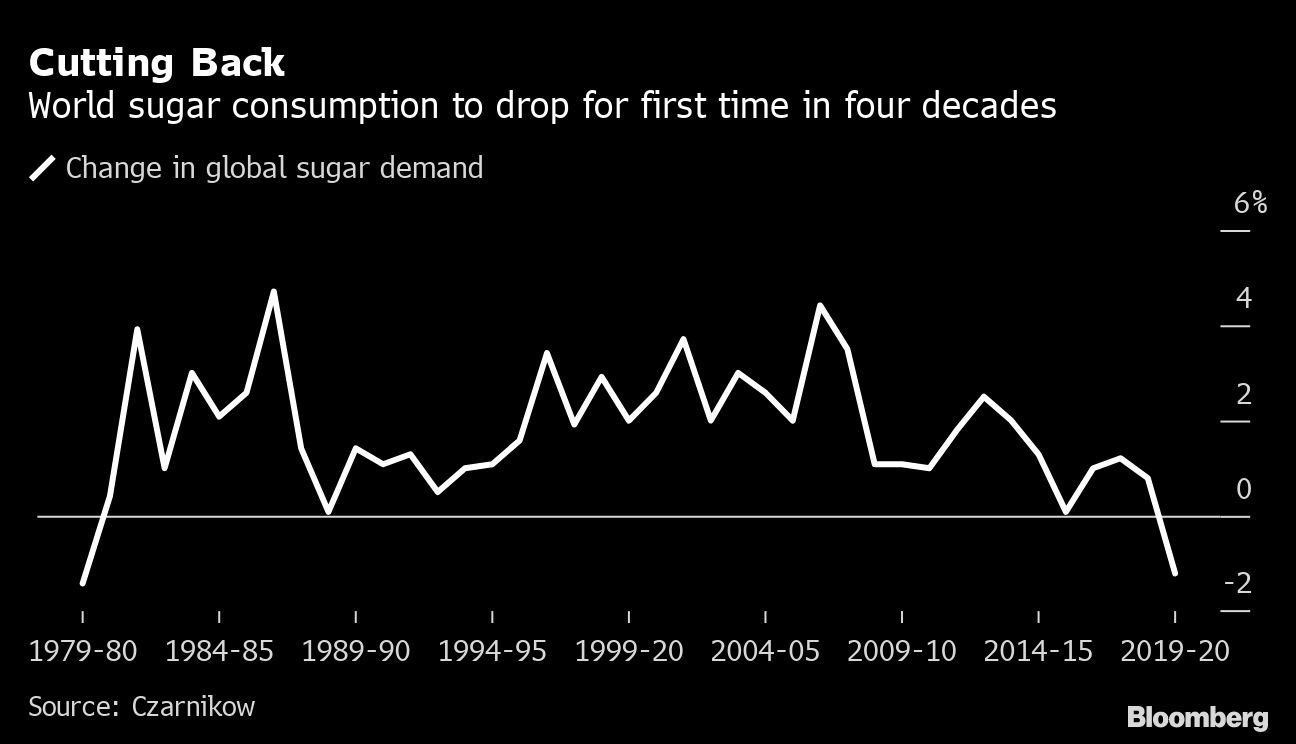 The sugar industry was already under siege before the coronavirus hit. Demand growth — largely driven by developing countries — slowed in recent years as lawmakers from South Africa to Thailand taxed sugary drinks and health groups urged people to cut back on carbs amid obesity concerns. Companies responded by selling slimmed-down treats and sugar-free sodas.

None of that had as much impact as the lockdowns that slashed out-of-home spending. And now the emerging global recession is hurting the demand outlook going forward.

In the first three weeks of April alone, Coca-Cola’s volumes slid about 25 per cent, and the company said the pandemic’s effect on the second quarter will be material. PepsiCo Inc. expects second-quarter revenue to fall and in Germany, a key sugar-consuming nation, a group of confectioners said sales at half of members surveyed fell in the four months through April.

Sugar consumption will slip 1.2 per cent to 169.9 million tons this season, according to supply chain services company Czarnikow. Analysts at the U.S. government and Citigroup Inc. also see demand falling this season. The International Sugar Organization said the crisis has wiped out most of 2020’s projected consumption growth, and bigger losses may follow. 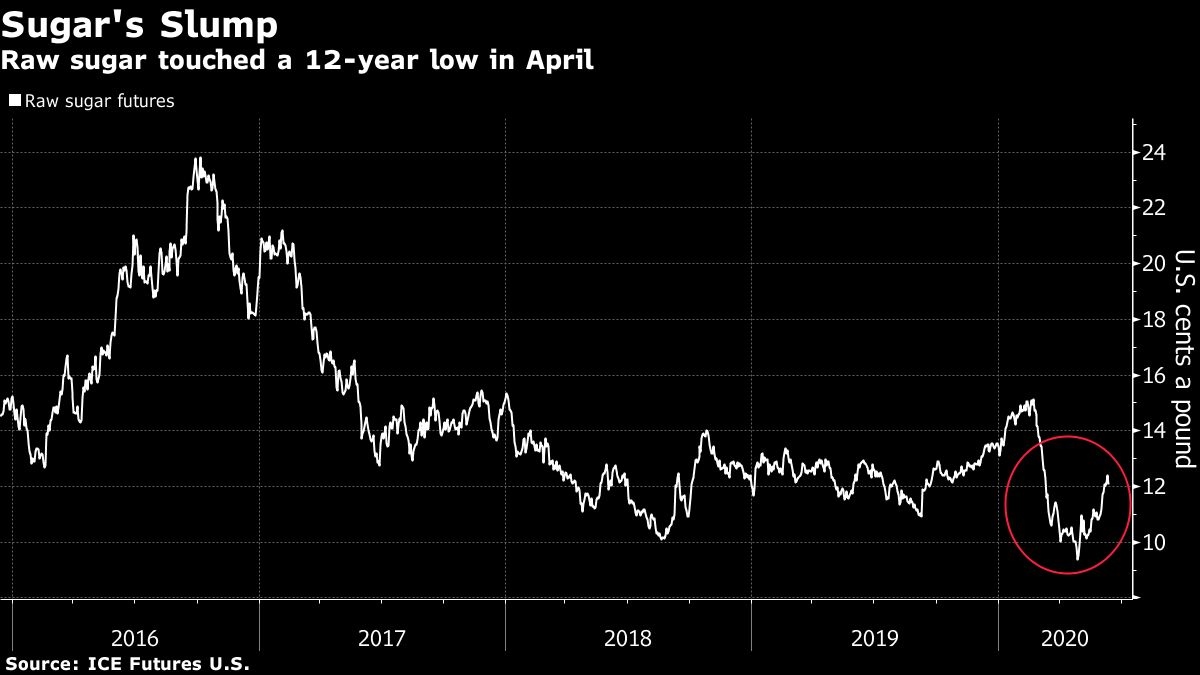 Falling demand will mean bigger-than-expected sugar surpluses this season and next, said John Stansfield, an analyst at trader Group Sopex. While New York futures recovered since late April amid concerns that supplies out of Brazil may start tightening, they’re still almost 50 per cent below a 2016 peak.

Even though people may turn to comfort foods like ice cream, that won’t offset lost consumption. For example, London-based ice-cream maker Oddono’s Gelati Italiani Ltd.’s sales have been affected by reduced staff and social distancing.

“If we were able to have five members of staff behind the counter serving as many people as possible at the fastest time, we would probably make 30 per cent to 40 per cent more than we make now,” said co-founder Christian Oddono. “Would people queue for an extra half an hour until it’s their turn? Some would do, some would probably turn around.”

There are still some positives. Lockdown measures are easing around the world and the U.S. Department of Agriculture expects global sugar consumption to rebound 3.6 per cent to a record next season. Demand growth in places like Asia and Africa has outpaced the developed world in recent decades as rising populations and burgeoning middle classes spend more on treats. 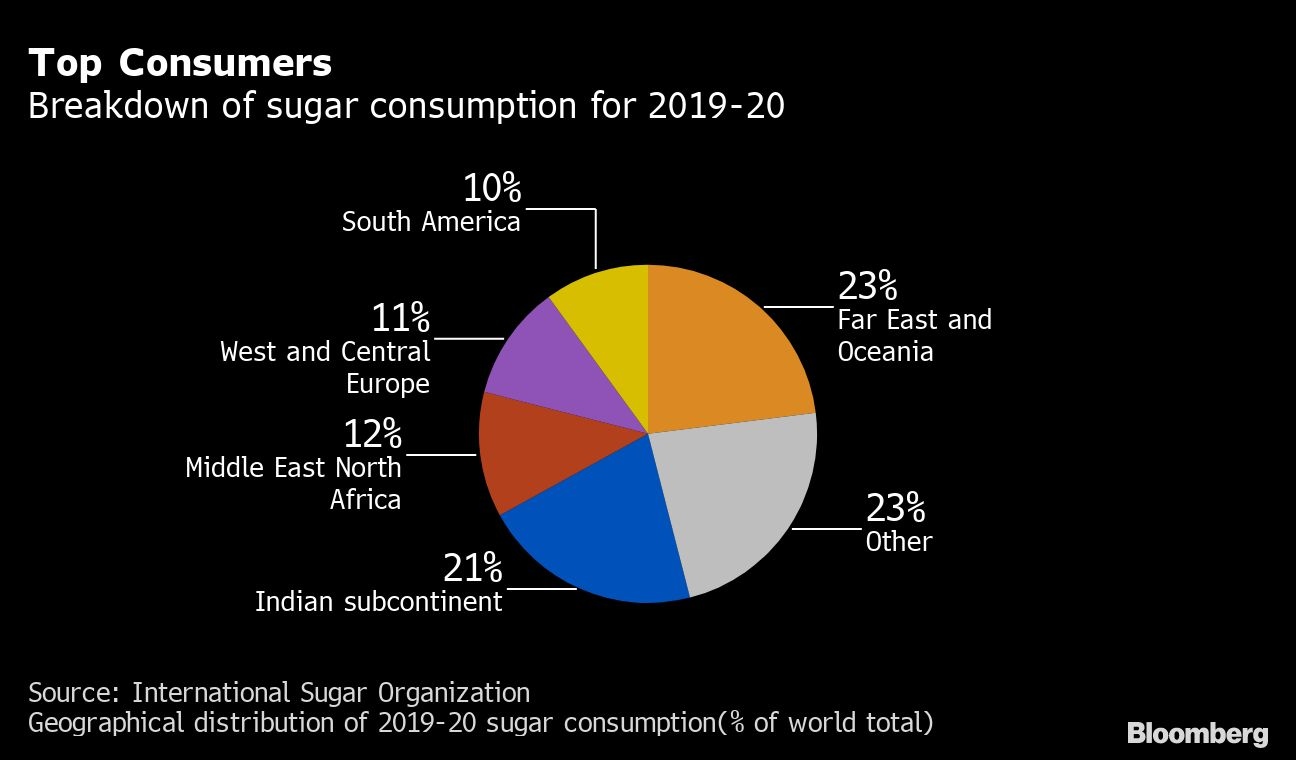 For now, the focus is on how the COVID-19 crisis will hurt short-term demand. The global economy will contract the most since World War II this year and emerging nations’ output will shrink for the first time in at least six decades, lowering incomes and sending millions into poverty, the World Bank said.

“The bigger picture of falling sugar consumption comes from sales data of Coke and Pepsi, which is terrible,” said Sopex’s Stansfield, who has worked in the sugar industry for more than two decades. “But what I fear more is falling global GDP. Unemployed people won’t be going to restaurants and bars. As GDP stalls, so will sugar consumption.”