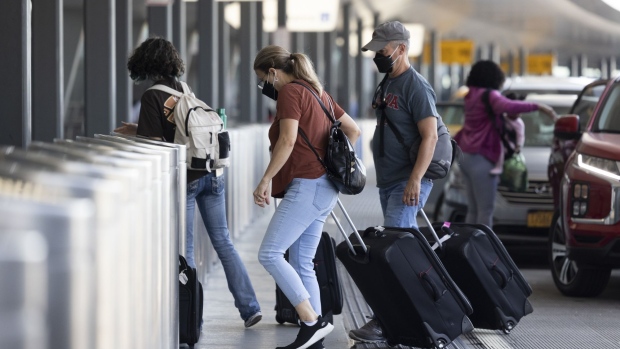 Travelers at LaGuardia Airport (LGA) in the Queens borough of New York, US, on Friday, July 1, 2022. As travel is ramping up for the July 4th holiday, staffing shortages are causing problems for some of the nations largest airlines. , Bloomberg

(Bloomberg) -- It’s been an expensive summer with the cost of travel, and just about everything else, going through the roof.  Now consumers are cutting back on their flights.

US airline bookings fell 2.8% in June, compared with May, based on data collected by Adobe Analytics. Online spending on tickets fell 5.7% to $7.9 billion over the same period.

One of the main culprits is higher ticket prices, which consumers had been putting up with for months, said Vivek Pandya, lead analyst with Adobe’s Digital Insights. Although average airline prices fell 6.4% in June, they’re still up considerably for the year and above pre-pandemic levels after vacationers went on a buying spree before the summer season began.

“We're seeing consumers having to deal with inflation across a lot of different sectors, including fuel and food prices,” Pandya said in an interview. “They're now being a little more reticent to continue to book at this sort of pace they were booking earlier in the year.”

This means consumers who are looking for better deals on flights may have more luck in the next few months than in the spring. But the bargain-basement fares available earlier in the pandemic aren’t likely to return anytime soon.

Airfares tracked under the US consumer price index fell 1.8% in June from May — though that was after double-digit gains the three prior months. Corporate expense management platform TripActions also reported seeing a decline in US domestic flight prices, with the seven-day moving average dropping $70 from the mid-May peak. They’re still far higher than a year earlier.

Airlines had been raising fares this year in part to capitalize on a surge in demand as people resumed travel in the wake of the pandemic. They’ve also passed along higher costs from fuel and wages. The companies have projected confidence that bookings will remain strong through the end of this year, even as fears of a recession mount.

“We're selling now into the latter part of the summer, early fall already, which seasonally is a little less amount of demand than what we've seen on the front end of the spring and summer surge,” Bastian said on a conference call. “The fare environment, it continues to be healthy.”

Some people who were “priced out” of summer fares will be eager to book flights for the fall, Delta President Glen Hauenstein said.

Delta and other airlines have also had to hold back on scheduling more flights to reduce delays and cancellations, with staffing still constrained by Covid-19 cases and competition for new hires. Despite the surge in demand, an S&P 500 index of major US airline stocks is down 16% this year on worries about whether the industry will be able to keep passing rising costs on to consumers.