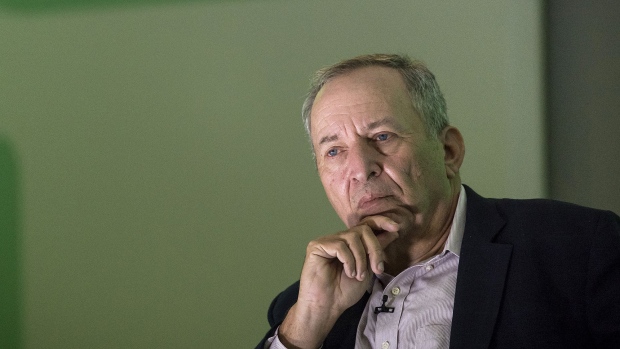 (Bloomberg) -- Former U.S. Treasury Secretary Lawrence Summers blasted proposals to tinker with prices as a way of reining in decades-high inflation, saying there’s no alternative to tighter monetary policy from the Federal Reserve to temper demand.

“We are plumbing the depths of new bad ideas with that one,” Summers told Bloomberg Television’s “Wall Street Week” with David Westin on Friday, when asked about a proposed holiday for the federal gasoline tax.

Several of the Senate’s most electorally-vulnerable Democrats, including Maggie Hassan of New Hampshire and Mark Kelly of Arizona, are spearheading a proposal to suspend the federal 18-cents-a-gallon gasoline tax until next year, while others are drafting a bill to lower insulin prices.

“There needs to be a lesson learned about gimmicks that poll well -- they’re like sugar highs, they make you feel good but they really often don’t redound to anybody’s substantial political benefit,” Summers, a paid contributor to Bloomberg Television, said.

Summers has repeatedly criticized the $1.9 trillion March 2021 pandemic-relief package, which included an additional round of direct payments to most Americans, for fueling inflation pressures. He said Friday that that measure also had no lasting political payoff for its sponsors.

“What’s remarkable is that all those much-discussed tax credits, the $2,000 checks that were getting mailed to everybody, did substantial economic damage, and nobody remembers them,” Summers said.

He detailed several specific problems with the gas-tax holiday idea:

Former U.S. Treasury official Mark Mazur, who left the department in September, agreed a gas-tax holiday “undercuts the administration’s climate change goals -- where really to care about fossil-fuel consumption, we don’t want lower prices for fossil-fuel buyers, we prefer higher prices.” Mazur also said it would be a stimulative policy -- the opposite of what lawmakers should be considering to combat high inflation.

As for moves to reduce the price of insulin, Summers advocated the federal government use its purchasing power to reduce pharmaceutical costs, but opposed any move to set prices for goods in general.

“Price controls are a ridiculous idea,” he said. “Richard Nixon tried that experiment. It was a disaster then and it would be an even worse disaster now.”

“We’ve made a substantial problem for ourselves, and I think if we don’t recognize that it’s at root a demand problem, and we don’t adjust monetary policy in a substantial way, it’s only going to become a more serious problem,” he said.