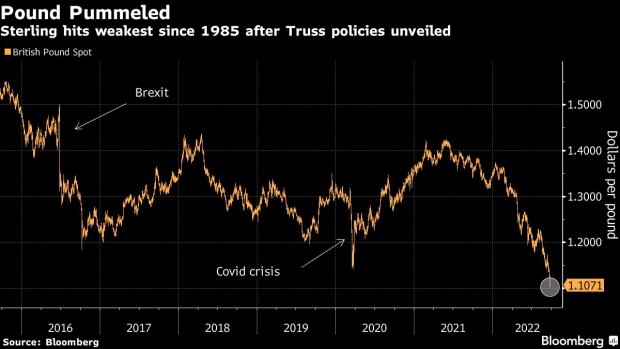 (Bloomberg) -- Former Treasury Secretary Lawrence Summers blasted the economic policies being adopted by newly installed UK Prime Minister Liz Truss, saying they’re creating the circumstances for the pound to sink past parity with the US dollar.

“It makes me very sorry to say, but I think the UK is behaving a bit like an emerging market turning itself into a submerging market,” Summers told Bloomberg Television’s “Wall Street Week” with David Westin. “Between Brexit, how far the Bank of England got behind the curve and now these fiscal policies, I think Britain will be remembered for having pursuing the worst macroeconomic policies of any major country in a long time.”

Truss’s government has set out the most radical package of tax cuts for the UK since 1972, reducing levies both on worker pay and companies in an effort to boost the long-term potential of the economy. Economists are concerned the package is unaffordable and will trigger a currency crisis over concerns about rising debt.

“It would not surprise me if the pound eventually gets below a dollar, if the current path is maintained,” said Summers, a Harvard University professor and paid contributor to Bloomberg Television. “This is simply not a moment for the kind of naïve, wishful thinking, supply-side economics that is being pursued in Britain.”

The former Treasury chief also flagged dangers with a surging dollar, which is adding to inflationary pressures for countries around the world and increasing pressure on overseas borrowers that have issued debt in the US currency. He also indicated that dollar appreciation -- fuelled by the Federal Reserve’s shift to a more aggressive path of interest-rate hikes -- may continue.

“This is going to be an issue that is going to be with us for some time,” Summers said. “Countries are going to have to be adjusting to a very strong US dollar,” and it will complicate macroeconomic management in may economies, he said.

Japan’s resort to intervention to prop up the yen -- which is heading for its biggest annual decline on record against the dollar -- isn’t the right approach, according to Summers.

Summers suggested that tighter US fiscal policy could be a help, by reducing the burden currently placed on the Fed to fight domestic inflation.

If Washington put “more emphasis on fiscal policy and less on monetary policy, that would create a policy climate of somewhat lower interest rates and probably wouldn’t mean quite as much upward pressure on the dollar.”

As for the Fed, Summers reiterated his endorsement of their hawkish shift on Wednesday, and noted that Chair Jerome Powell has become “increasingly clear” in recognizing that the necessary medicine needed to defeat inflation involves a recession.