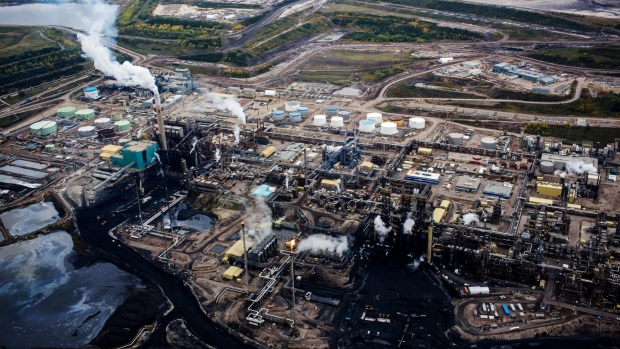 The Suncor Energy Inc. Millennium upgrader plant is seen in this aerial photograph taken above the Athabasca oil sands near Fort McMurray, Alberta, Canada, on Monday, Sept. 10, 2018. While the upfront spending on a mine tends to be costlier than developing more common oil-sands wells, their decades-long lifespans can make them lucrative in the future for companies willing to wait. Photographer: Ben Nelms/Bloomberg , Bloomberg

(Bloomberg) -- Suncor Energy Inc., Canada’s biggest oil-sands producer, will trim 10% to 15% of its workforce in the next 18 months, joining a long list of energy companies in Alberta that have announced layoffs following a collapse in fuel demand due to the virus.

Suncor had already been preparing for a smaller workforce but the planned cuts, which could affect as many as 2,000 employees, were accelerated after the Covid 19 pandemic contributed to a collapse in oil prices, Sneh Seetal, spokeswoman, said by phone.

Staff reductions won’t be limited to any geographic area or part of the company, she said. Suncor will slash about 5% of its workforce in the next six months. Employees were informed earlier Friday of the plans.

Energy companies in Alberta, the Canadian province that holds the world’s third-largest oil reserves, started cutting jobs after oil prices first plunged in 2014. The pandemic, which spurred drillers to shut in more than a million barrels a day of production, has only worsened the situation. In recent months, companies including TC Energy Corp. and Ovintiv Inc. have announced staff changes.