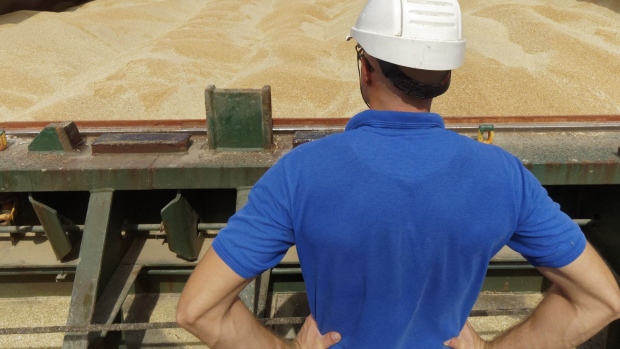 A worker looks at the hold of a cargo ship filled with wheat grain for export at Nikolaev port in Nikolaev, Ukraine, on Wednesday, Aug. 31, 2016. Ukraine's government is struggling to unlock a $17.5 billion international bailout from the International Monetary Fund after delays in passing a series of reforms to boost transparency and improve the court system. Photographer: Bloomberg/Bloomberg , Photographer: Bloomberg/Bloomberg

(Bloomberg) -- Support is growing in Europe to send warships to the Black Sea to escort freighters carrying Ukrainian grain, as the world worries about shortages and prices rise, according to Estonian President Alar Karis.

The priority is to ensure grain gets to Africa and other developing countries, Karis said in an interview on Tuesday on the sidelines of the World Economic Forum in Davos.

Russia has effectively blockaded Ukrainian ports as part of its invasion, leaving the government in Kyiv struggling to get grain shipments out and sending prices to near-record highs. The head of the UN’s World Food Programme, David Beasley, has said the stoppage is a “declaration of war” that threatens to trigger mass migration and a global food crisis.

Lithuanian Foreign Minister Gabrielius Landsbergis has told the Guardian newspaper his country was seeking a naval coalition “of the willing.” Britain is in talks with allies about sending warships to the Black Sea, The Times newspaper reported. A government spokesperson said the UK would continue to work with other countries to find ways to resume the export of grain from Ukraine, but added “there are no current plans to deploy UK warships to the Black Sea.”

The 1936 Montreux agreement allows Turkey to regulate maritime traffic through the Bosporus strait to the Black Sea during peace and wartime alike.

Karis said he had been pushing for some time for naval escorts for grain freighters, but “not everybody was convinced that this was a good idea.” The concern, he said, was it “might escalate the war in the Black Sea. But it seems like it will work.”

By blocking Ukraine’s ports, Russia has forced it to try and ship grain by land, resulting in exports of only about a fifth of its usual potential volumes. But its campaign on the ground has faltered and it has failed to take key ports such as Odesa, while its flagship Black Sea fleet warship sank.

“The U.K. and some others probably will join us, because it’s a humanitarian crisis which we are facing if the grain doesn’t get out of the country,” Karis said.

Russia and Ukraine are major suppliers of wheat and sunflower oil to the world. Ukraine also ranks among the top six exporters of corn, chicken and honey. It has traditionally shipped millions of tons of grains a year via the Black Sea, earning about 10% of its gross domestic product from the agriculture and food sector.

Karis was cautious about describing potential naval protection for ships as an alliance operation. “Not necessarily NATO operation, but let’s say NATO countries.”

Members of the military alliance were initially wary of shipping offensive weapons to Ukraine to help it fight back against Russia, fearing it could draw them into direct conflict with Moscow. But that concern has lessened as the war has gone on, with the U.S. and other allies now sending Ukraine heavy weapons including armored vehicles and more artillery batteries.

Karis said he wasn’t worried that Russian President Vladimir Putin might try and expand his war beyond Ukraine.

“We have seen that Russia is quite ill prepared for this kind of war so I don’t expect that they will manage to go out to different countries, either Moldova or some other country,” he said. “At least at this very moment from an Estonian perspective we feel quite safe.”

But he echoed calls by other Baltic nations for a bigger NATO presence in Europe’s east, even if Finland and Sweden manage to join the alliance.

“We’ve see that this kind of deterrence does not work, which we before, and the security situation is different now,” he said. “We are looking for permanent troops in our region. Same with weapons.”