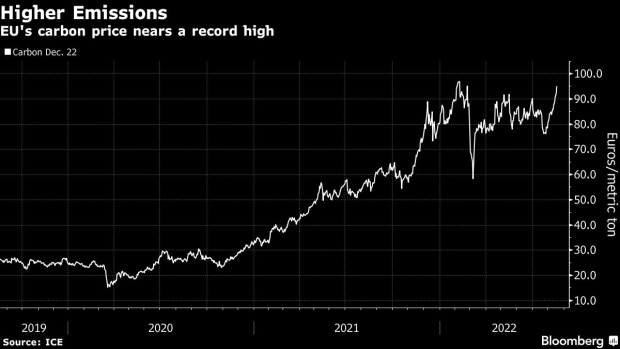 (Bloomberg) -- Europe’s carbon price jumped to a record as the region’s energy crisis is driving up demand for some of the most polluting fuels.

Businesses are burning coal and even oil to keep power stations and factories running while cleaner-burning natural gas becomes increasingly scarce. The situation threatens to push up Europe’s carbon footprint this year even if soaring energy prices and shortages force industries to shut.

“Because burning coal and even fuel oil is so much dirtier than burning gas, even a small substitution could outweigh demand destruction,” said Mariko O’Neil, an analyst at researcher BloombergNEF.

The electricity sector is by far the largest source of emissions in the European Union’s carbon market and a shift away from cleaner sources could be hard to overcome. That’s being reflected in the cost of EU pollution rights, which soared to a record 99.22 euros ($99.73) per metric ton Friday. UK carbon permits and coal prices also hit fresh highs.

How high emissions rise this year will depend on the balance between dirtier power generation and how much fuel costs stifle demand. This week, Norsk Hydro ASA unveiled plans to close an aluminum smelter in Slovakia, while the operator of one of Europe’s largest zinc smelters said it was halting production due to high energy prices.

But at the same time, power generation is polluting more. Utility Uniper SE has turned on a decades-old power plant in Sweden that burns fuel oil, an option that’s dirtier than gas, though not as intense as coal. And in Spain, government policies meant to limit energy bills are inadvertently encouraging the use of gas power plants over more efficient ones. This comes ahead of winter when more coal power could meet demand if gas supplies are insufficient.

The power sector is already polluting more than in recent years. In the first nine months of 2022, emissions from fossil fuel-burning power plants in Germany, France, Britain and Italy are set to rise 10% compared to the same period in 2019, according to estimates from BNEF. Overall, Germany’s decision to bring more coal- and oil-fired plants online this winter may push EU emissions up by as much as 5% next year, according energy research firm ICIS.

The rise in power sector emissions isn’t just because of the shift from gas to coal, but also because of a dearth of cleaner options. Most importantly, France’s fleet of nuclear reactors have been operating at about 50% capacity this summer, leading the country to import electricity from neighbors that rely more heavily on fossil fuels.

Low-carbon hydro power has also been hit this year because of dry conditions that have shrunk the rivers and reservoirs that the plants need to operate. At the same time, the summer has seen lower wind speeds than normal in parts of Europe, including the UK and Germany, which have the biggest fleets of turbines.

Still, in the long term, Europe’s emissions will decline. European politicians will complete final negotiations later this year to tighten the carbon market to help deliver on the EU’s goal to cut emissions by 55% by 2030 compared to 1990 levels.

As part of that effort, the EU will cut the amount of free permits issued to industrial companies. That may limit how much those companies would be willing to sell permits this year even if their demand drops because of lower production.