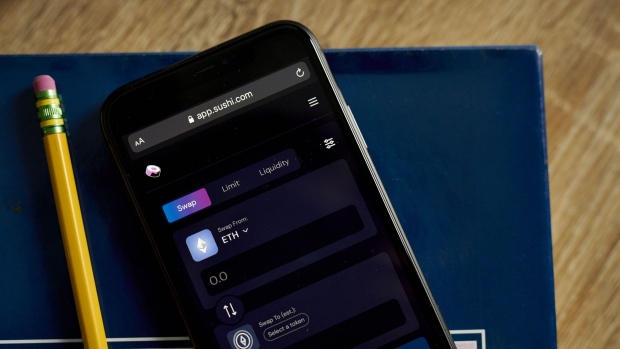 The Sushiswap website Swap page on a smartphone arranged in the Brooklyn Borough of New York, U.S., on Thursday, July 29, 2021. Lending on cryptocurrency platforms rose 7.6% from last week to $29.40 billion, according to data compiled by DeFi Pulse. Photographer: Gabby Jones/Bloomberg , Bloomberg

(Bloomberg) -- The price of Sushi, the native cryptocurrency of decentralized exchange SushiSwap, plunged on Wednesday after the platform’s chief executive warned the project could run out of funds within 18 months.

SushiSwap’s treasury is “facing a significant deficit” which “threatens Sushi’s operational viability, requiring an immediate remedy,” its head chef — or CEO — Jared Grey said in a proposal for changes updated on Tuesday.

SushiSwap, which makes money by charging fees on transactions, has suffered from a protracted slump in cryptocurrency prices and trading. The platform was built in 2020 on the code of Uniswap, another popular decentralized exchange.

Decentralized finance platforms, where investors borrow, lend and trade cryptocurrencies through computer algorithms, have so far largely faced a less severe fallout from crypto’s downturn. The year-long rout has led to defaults, layoffs and bankruptcies across crypto companies of all stripes, culminating in the implosion of exchange FTX last month.

But Sushi’s troubles indicate that no corner of the digital-assets industry is immune to the crypto winter.

Decentralized exchanges built using Ethereum saw volumes fall 45% last month from a year earlier, according to Kunal Goel, a research analyst at Messari. SushiSwap’s share of volumes among these platforms has fallen to just 2% from 12% over that time frame, he added.

SushiSwap is a decentralized exchange that uses algorithms to create trading markets for any given pair of crypto tokens. Its treasury hold funds in crypto assets to pay developers, finance project maintenance and infrastructure costs along with other expenses.

Grey, who took up the top position on SushiSwap in October, said developers running the platform had slashed annual operational costs to $5 million from $9 million, but that the cuts would not be enough. As a temporary remedy, Grey proposed diverting all rewards given out to Sushi stakers to its treasury for a year or until a new economic model is finalised for the token.

“Bear market environments present multiple challenges for projects and teams, and recently, we’ve seen many notable projects lay off substantial personnel or go bankrupt,” Grey wrote. “It makes little sense for Sushi to follow a similar path when it has an opportunity to capture its singular significant source of revenue and direct it back to the Treasury for the benefit of all.”