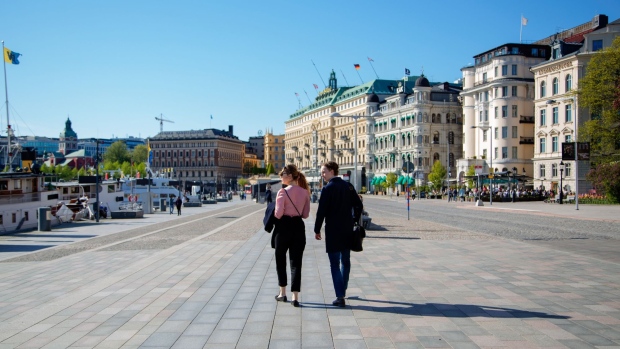 Pedestrians walk near the habour in Stockholm, Sweden, on Friday, May 22, 2020. Sweden, which has refused to close down schools and restaurants to contain the new coronavirus, is being closely watched as many other countries are gradually opening up their economies from stricter lockdowns. Photographer: Loulou D'Aki/Bloomberg , Bloomberg

Peter Svensson, a spokesman for the Financial Supervisory Authority in Stockholm, said one area of particular interest is an exemption granted to Swedish securities firms a few years back, essentially giving them more lenient reporting obligations.

Many of the market’s structural problems were laid bare three months ago, when a record number of credit funds were forced to halt redemptions to preserve liquidity. Investors panicked, and it became clear that the funds couldn’t accurately value the bonds in their portfolio.

The lack of transparency around pricing has prompted many investors to call for change. The FSA now wants to talk to the fund industry about how to “create a more well-functioning market,” Svensson said.

But following a consultation with the fund industry in 2017, the FSA granted exemptions for some of the reporting requirements, meaning trading companies can publish information up to two days after buying or selling the bonds.

“It is these exceptions that the FSA could reconsider in whole or in part,” Svensson said.

The market dysfunction has even drawn criticism from the central bank. First deputy governor Cecilia Skingsley said last month that Swedish corporate bonds are “characterized by low transparency in pricing,” and the problem has gotten “even worse since the crisis hit.”

To help improve liquidity in the market, Svensson also said the FSA is “positive on exploring the possibilities of giving Swedish fund companies access to more tools.”