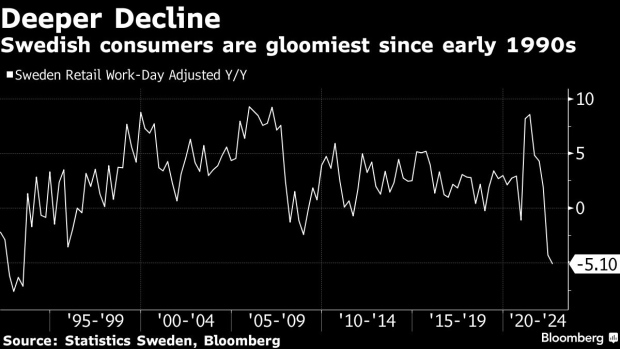 (Bloomberg) -- Sweden’s retail sales fell in August from a year earlier at their fastest pace in almost three decades, as consumers mainly cut spending on durable goods, adding to concerns of a rapid cooldown in the largest Nordic economy.

Retail sales fell 0.4% from July, the fourth monthly decline in a row, Statistics Sweden said in a statement. The decline was 5.1% on year, the biggest since June 1993 -- a period when the country was still wrestling with soaring unemployment in the wake of a financial crisis that crippled the banking sector.

The data adds to a gloomy picture as other parts of the Swedish economy, such as the housing market, are already reeling from the effect of accelerating inflation and rising borrowing costs. Worries of potential fallout for the economy have been fueled after the Swedish central bank announced a record large interest-rate hike last week, while several forecasters already see the economy contracting next year.

According to a separate statement, Sweden’s consumer confidence fell more than economists expected this month to 49.7, also the lowest since 1993.

“Households are as gloomy as in the 90s and their plans for major purchases have cooled off as well,” Swedbank analyst Maria Wallin Fredholm said in a note to clients.

“With interest rates and inflation edging higher by the month, at the same time as households return to more normal consumption patterns, i.e., more services consumption, retail sales are expected to continue on this weaker trend,” the analyst said.

Retail sales in durables fell by 9% from year earlier, while sales of consumables excluding alcohol was unchanged, the office said.