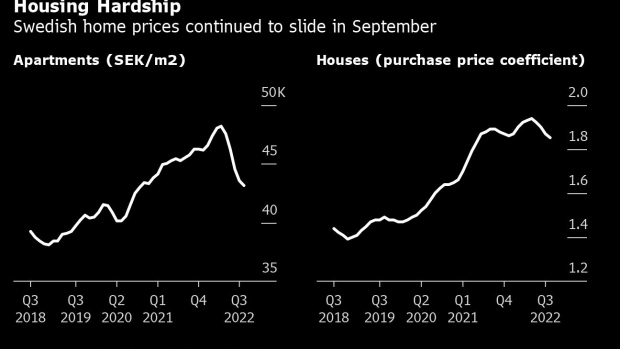 (Bloomberg) -- The slide in Swedish home prices deepened in September amid signs the housing market was drying up as interest rate hikes and concerns over surging energy costs dented demand, according to the latest broker data.

The Nordic nation, with one of the world’s hottest property markets during the pandemic, is now facing a double-digit decline similar to peers such as Australia and Canada. While the market has been cooling since March when the Riksbank embarked on a historic turnaround in monetary policy, there is growing concern that a potential surge in power prices in the coming winter may deepen the slump.

Apartment prices have declined 6% from a year earlier, while house prices -- which saw bigger gains during the pandemic as buyers sought more space to work from home -- have eased 3%, Svensk Maklarstatistik, which collects data from property brokers, said in a statement on Friday. Deal volume for September and the entire third quarter fell “significantly” from corresponding levels last two years, it said.

“There are currently quite a lot of buyers expecting prices to drop further, so they hold off on buying,” Helena Bornevall, senior economist at Svenska Handelsbanken, said by phone, while adding she doesn’t think the market has seized up completely.

“It’s more of a wait-and-see situation, rather than that you can’t afford it or won’t get your mortgage application approved.”

The annual decline in the cost of flats is now the fastest since August 2018 when the Nordic nation last underwent a correction in property prices, the data show. The drop comes on the back of a one-percentage-point key rate hike by the Riksbank, the biggest in nearly three decades under the current policy setup, and a historic increase in electricity prices in the Nordic nation.

The central bank, which has admitted it’s had a bad year as a forecaster, expects to raise borrowing costs to 2.5% in a year, as it tries to strike a fine balance between cooling inflation that’s at a three-decade high and avoiding a hard landing for the economy.

Lenders and the Riksbank expect prices to weaken further, projecting a 15-20% drop from the all-time-highs reached earlier this year. That would mean about half of the decline is already done, based on data from Valueguard that shows an 8.7% fall as of August.

Unlike for most rich nations, Sweden’s housing market was virtually undented by the financial crisis. Its last real-estate crash that brought the economy and the banks to their knees happened in the early 1990s.

The drop in prices for detached houses has been more pronounced in Sweden’s three biggest cities of Stockholm, Malmo and Gothenburg, with declines of 6-9% from a year earlier. Still, there are tentative signs the drop may be easing in the capital city, economists at SEB AB wrote.

“An interesting note, however, is that the price decline is slowing down in Stockholm, which is usually a leading indicator for the rest of the country,” SEB said. “It’s too early to talk about a trend break, but it is in any case a tendency to keep an eye on.”