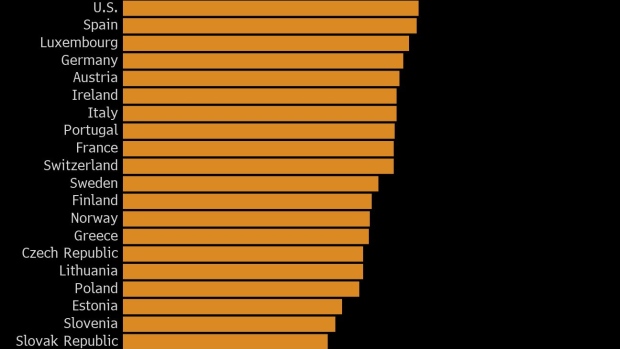 (Bloomberg) -- Sydney extended its lockdown for a further two weeks as Australia’s most-populous city battles an outbreak of the delta strain of the coronavirus that’s already kept it isolated from the rest of the nation for three weeks.

Stay-at-home orders will remain until at least July 30, New South Wales state premier Gladys Berejiklian told reporters Wednesday. The city recorded 97 new cases yesterday, including at least 24 who were infectious in the community despite being told to stay at home.

“It always hurts to say this, but we need to extend the lockdown for at least another two weeks,” Berejiklian said. “We will assess the situation at the end of those two weeks and provide information beyond that.”

Australia’s tardy vaccine roll-out -- the second-slowest among the 38 OECD nations -- has made the country particularly vulnerable to the delta variant, which has increasingly leaked out of the quarantine system for overseas arrivals. While economies such as the U.K. and U.S. are opening up, Australia’s international borders remain largely closed, and comparatively small clusters of the coronavirus make even domestic travel difficult as states and territories pull up the drawbridge.

Australia on Tuesday increased support to companies and workers affected by extended lockdowns, providing leeway for the state’s pro-business government to increase measures to curb the virus spread as authorities grow concerned people aren’t following lockdown rules. The latest surge, which has topped 864 cases, spread from an un-vaccinated chauffeur who was infected while transporting airline crew last month.

Even still, the effects of locking down Sydney, which contributes about a third of Australia’s annual economic output, will be felt. Goldman Sachs Group Inc. on Tuesday cut its growth forecast for Australia for the third quarter to 0.6%, from the 1% seen earlier, should the city be shuttered for a further three weeks.

Commonwealth Bank estimates each week of Sydney’s lockdown costs the Australian economy A$1 billion ($744 million), it said in a report Wednesday. The lockdown has significantly increased the level of economic uncertainty for the near term, but when restrictions are eased the economy should rebound swiftly, it said.