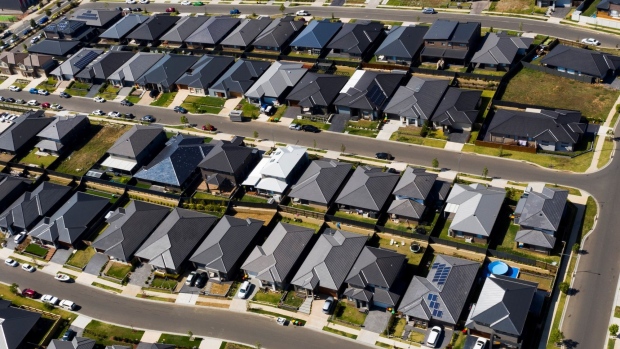 SYDNEY, AUSTRALIA - OCTOBER 23: An aerial view of the sprawling new housing estates of Oran Park on October 23, 2019 in Sydney, Australia. The local Government area of Camden is one of the fastest growing areas in Australia, with a boom in residential and commercial development. Housing prices are also expected to rise with the announcement of two new Metro West stations to be built in the Western Sydney area. (Photo by Brook Mitchell/Getty Images) , Photographer: Brook Mitchell/Getty Images AsiaPac

(Bloomberg) -- Out west of Sydney it gets hot. Really hot. Like 50 degrees Celsius (122 Fahrenheit) hot. Stand in a car park and the radiant heat from the tarmac can push the mercury to 80C—approaching the temperature of a slow cooker.

It’s these new suburbs that the government is banking on to accommodate almost half of the 1.8 million people who are expected to swell the city’s population over the next 20 years.

Once a place of sweeping plains, eucalyptus trees and cottage farms, the area is changing rapidly. Housing estates are rising for those pushed out by the center’s high property prices. A new airport is slated to open in 2026, along with a huge industrial precinct.

What the glossy brochures fail to mention is the challenges that come with living in a region where the number of days over 35C—a level dangerous even for the fit and well—is forecast to keep rising as global temperatures increase.

“Australia is ahead of the curve when it comes to warming,” said Liz Hanna, an expert in heat and health at Australian National University. “We need to be really serious about not having houses where people sit and cook and die.”

Sydney isn’t alone in facing the perils of a hotter future. Cities across the world’s desert belts, many of them some of the poorest parts of the planet, are in a direct line of fire for global warming. But Australia is a rich country where even the less well off have greater options of mobility.

Yet stories of melting roads have become a staple of the local news in Sydney’s west in recent years as high temperatures raised mortality. During an exceptional heatwave like last summer, death rates spike, particularly when the heat carries on into the evening and people are unable to cool down. Academics have documented increased violence both in and outside the home as temperatures and tempers rise.

So why is Sydney building here? Simply put, it has little choice. The city proper is bounded by the ocean to the east and national parks to the north and south. Out west, there is space and land is cheaper.

Most of the housing is built by the private sector and the homes are often single-glazed, black-roofed properties crammed together with little natural greenery. Access to shops or services nearly always requires getting into the car. On really hot days, the power grid can buckle under demand from air conditioners.

The more they build the worse it will get. As the volume of hard surface increases, so does the temperature. Researchers found that in Sydney’s treeless urban areas, morning summer surface temperatures are nearly 13C higher than in vegetated areas.

“It is going to be stinking hot with lots of people,” said Sebastian Pfautsch, a researcher at Western Sydney University who specializes in projects to mitigate urban heat. “These new suburbs—the nice term is urban sprawl, I call them the Australian nightmare.”

He advises local councils who are trying to plan for that nightmare. Pilot projects are testing approaches such as painting road surfaces with heat-reflective paint to retro-fitting playgrounds with materials to protect children from excessive ultraviolet light. But what’s really needed, Pfautsch says, is a change in the whole development process which puts environment considerations from shade to water usage at its heart.

The solutions Sydney finds may end up helping other cities where global warming is making a bad problem worse.

Hanna’s research has shown areas where urban and housing design is appropriate, temperatures can be as much as 8C cooler than neighboring suburbs—the difference between life and death on the hottest days.

“That buys us time,” Hanna said. “With climate change, some places are going to be too hot to live in. That’s coming sooner than we know.”