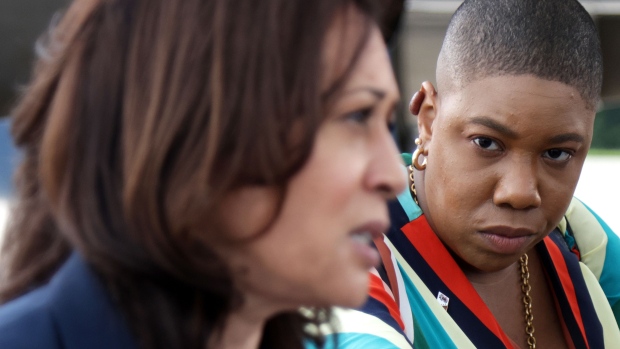 (Bloomberg) -- Symone Sanders, a top aide to Vice President Kamala Harris will depart the White House by the end of the year, according to people familiar with the matter.

She has served as the Harris’s spokeswoman since the beginning of the Biden administration, and has spent considerable effort in recent months beating back reports of dysfunction and disarray in the vice president’s office.

At the same time, President Joe Biden has handed Harris two very challenging missions. The first involves addressing the “root causes” of migration to the southern border of the U.S., a problem that several of Biden’s predecessors failed to solve. Then, as one Republican-led state after another enacted restrictions on voting in the wake of Donald Trump’s loss in 2020, the president asked Harris to become a champion of voting rights, though passage of any legislation in Congress remains a remote prospect.

Last month, Sanders accompanied Harris on a trip to France that was intended both to raise the vice president’s profile and help soothe hurt feelings in Paris over the loss of a submarine contract with Australia.

Sanders played a prominent role in Biden’s 2020 campaign for president. In 2016, she was the national press secretary for Senator Bernie Sanders in his run for the Democratic presidential nomination.

She wrote in her 2020 memoir, “No, You Shut Up: Speaking Truth to Power and Reclaiming America,” that she wanted to one day become White House press secretary. After the election, however, Biden chose Jen Psaki for that role. Sanders’s imminent exit from the White House was reported by CNN earlier Wednesday night.