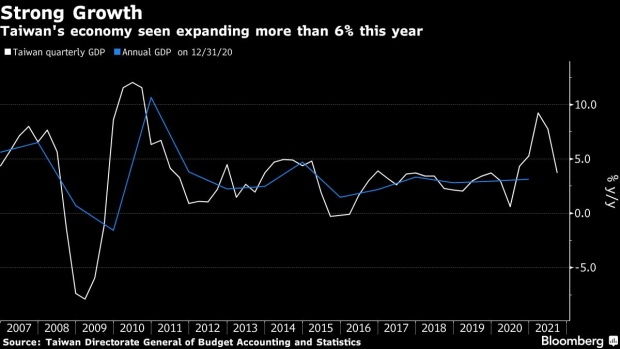 People shop at food stalls at the Ningxia Night Market in Taipei, Taiwan, on Thursday, July 30, 2020. As the world braces for the worst economic contraction since since World War II, Taiwan appears poised to get away lightly. Economists expect the export-dependent island to show a second-quarter performance that is merely stagnant, as opposed to the deep recessions seen elsewhere, and a brighter outlook for the rest of the year. , Bloomberg

(Bloomberg) -- Taiwan raised its growth forecast for this year and next as ravenous global demand for semiconductors looks set to underpin its strongest growth in more than a decade.

Officials raised their outlook for full year gross domestic product growth to 6.09%, up from their most recent forecast of 5.88%, according to a statement from the government’s statistics bureau. That would be the fastest pace of growth since the economy grew more than 10% in 2010 in the wake of the global financial crisis.

The government forecast is in line with the 6% median estimate in a Bloomberg survey of 33 economists.

Taiwan’s manufacturers, such as leading chipmaker Taiwan Semiconductor Manufacturing Co., have been running their production lines at close to full capacity for much of the year to meet pent-up international demand for electronic components as countries reopen their economies in the aftermath of the Covid-19 pandemic.

The economy is likely to expand 4.15% in the fourth quarter, the statement said.

Surging exports and capital expenditure as companies splurge on expanding their production capacities have been the main contributors to economic growth so far this year, according to government data. Friday’s figures show these drivers will likely begin to ease off next year.