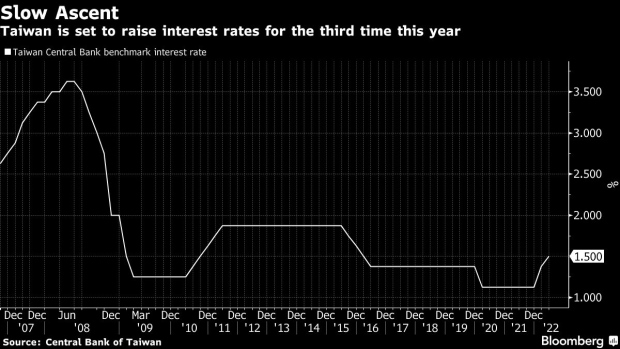 (Bloomberg) -- Taiwan’s central bank increased its benchmark interest rate by a modest amount on Thursday, the third hike this year, as it tries to battle inflation without further weighing down its slowing economy.

The central bank raised its policy rate by 12.5 basis points to 1.625%, in line with forecasts of most economists surveyed by Bloomberg. It also increased its reserve requirement ratio by a quarter point. At the same time, the bank cut its 2022 economic growth forecast for the third time this year -- to 3.51% -- with gross domestic product expected to slow further next year to 2.9%.

Officials have sought to balance inflation risks and the economy, which has been weighed down by sluggish demand from China, Covid restrictions on supply chains and other global headwinds. The island’s rate hike was milder compared with regional economies such as the Philippines, Indonesia and Hong Kong, which raised borrowing costs by as much as 75 basis points.

“Taiwan’s economic slowdown is very apparent, with export growth only in the single digits and manufacturing PMI shrinking,” Ma Tieying, an economist at DBS Group Holdings Ltd., said before the rate decision. “The risk of Taiwan’s economic downturn is very high, so from this point of view, increasing by 12.5 basis points is a compromise option and the best option.”

Export orders have started to slow, gaining 2% in August from a year earlier, with orders from mainland China and Hong Kong falling more than 25%. Manufacturing is also coming under pressure, with the purchasing managers index dropping in August to 42.7 -- its lowest reading since May 2020.

Domestic demand will be the main driver for growth this year, the central bank said. A potential boost could come from tourism after the government announced that it would lift quarantine for arrivals by mid-October.

The rate decision came hours after the US Federal Reserve hiked borrowing costs by 75 basis points, the fifth increase this year, to tame rampant inflation. Taiwan’s policy makers have been able to be more flexible in their hikes, with inflation peaking in the second quarter amid a slowdown in the economy. The central bank raised its key rate by a smaller-than-expected 12.5 basis points in June and a quarter point in March.

Taiwan’s central bank governor, Yang Chin-long, said at a briefing that the rate decision was not unanimous, with two of the 15 board members supporting a bigger hike of 25 basis points. The bank will continue tightening monetary policy until the year’s end.

Brian Tan, economist at Barclays Bank Plc, wrote in a note after the hike that he expected another hike of 12.5 basis points in December.

Economists surveyed by Bloomberg have revised down Taiwan’s GDP to 3.2% for this year. They also expect another rate increase again in the fourth quarter, to 1.75%.

Higher interest rates may help to bolster Taiwan’s dollar, which has slumped this year on the back of a stronger US currency, weaker export demand and rising geopolitical tensions. The local dollar was down 4.8% against the greenback in the past month, the third-worst performer among Asian currencies.

The central bank said the local currency is relatively stable, citing weakness on foreigners selling stocks, and foreign outflows were not the result of the widening rate gap between Taiwan and the US.