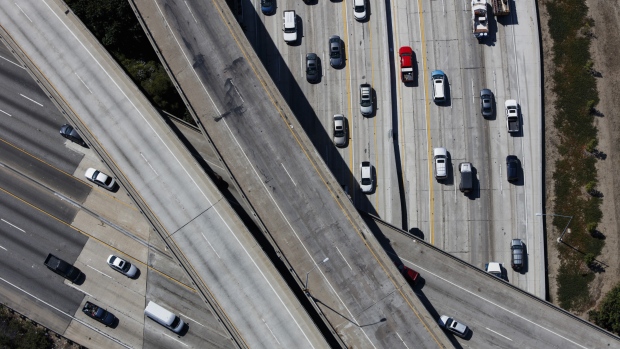 Vehicles move along the Interstate 405 freeway during rush hour in this aerial photograph taken over the Westwood neighborhood of Los Angeles, California, U.S. , Bloomberg

Talks between California and federal officials on vehicle emissions and fuel economy standards have broken down without a deal, three people familiar with the matter said.

The Environmental Protection Agency and National Highway Traffic Safety Administration had been meeting with California’s Air Resources Board in pursuit of a compromise as the federal agencies aim to finalize by late March or early April a replacement for Obama-era fuel efficiency regulations that automakers are seeking to modify.

The breakdown in talks adds to tension between Washington and Sacramento, which has emerged as a major antagonist to the Trump administration. California is leading a group of more than a dozen states in a lawsuit to block Trump from diverting funds from the federal budget to pay for his promised border wall, saying the move exceeds the power of his office.

No further discussions are scheduled over the critical auto industry rules, said the people, who asked to not be identified discussing the private talks. Representatives of the EPA didn’t respond to an emailed request seeking comment. NHTSA representatives didn’t immediately comment.

In a statement, CARB acknowledged the impasse and said federal officials ended communications about the rules late last year.

“The administration broke off communications before Christmas and never responded to our suggested areas of compromise -- or offered any compromise proposal at all,” CARB spokesman Stanley Young said in an email. “We concluded at that point that they were never serious about negotiating, and their public comments about California since then seem to underscore that point.”

EPA Acting Administrator Andrew Wheeler briefly meet with CARB Chairman Mary Nichols earlier this month when the two appeared at the BloombergNEF Summit San Francisco, and both made clear in public statements that they remained far apart on the rules.

In an interview with Bloomberg Television on Feb. 4, Wheeler dismissed a counter-offer by California to extend the timeline of the existing requirements because it would not lower vehicle prices and improve road safety enough, goals the Trump administration has used to justify its proposal.

The federal agencies released in August a proposal that recommended capping mileage requirements at a 37 miles per gallon fleet-average after 2020, instead of rising to about 47 mpg under rules adopted by the Obama administration. It also recommended revoking California’s cherished authority to set tailpipe greenhouse gas emissions standards for new autos.

The federal regulators are considering a final rule that would require marginal fuel efficiency improvements after 2020, rather than halting gains after 2020 as recommended in the August proposal, another person familiar with the matter said.

Automakers have urged the Trump administration to broker a compromise with California to maintain nationwide uniformity in fuel economy requirements. Roughly a dozen other U.S. states adhere to California’s vehicle emissions standards, a bloc that represents more than a third of U.S. auto sales.