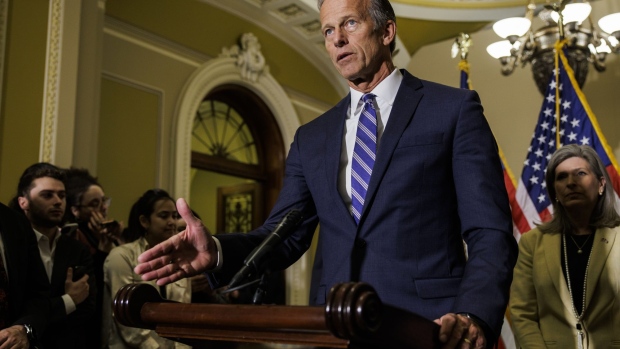 Senator John Thune, a Republican from South Dakota, speaks during a news conference following the weekly Republican caucus luncheon at the US Capitol in Washington, DC, US, on Wednesday, Sept. 28, 2022. The Senate voted Tuesday to advance a stop-gap funding bill to keep the government running after a bid to include a controversial energy permitting bill was dropped. , Bloomberg

(Bloomberg) -- College boosters would be blocked from getting a tax deduction for donations that are used to compensate student athletes for use of their name, image or likeness, under a bipartisan bill introduced Wednesday in the Senate.

Senators John Thune, a South Dakota Republican and Ben Cardin, a Democrat from Maryland, introduced their legislation to prohibit individuals and organizations from getting charitable contribution tax deductions for donations specifically targeted for what’s known as NIL -- referring to name, image and likeness -- payments in college and university athletic programs.

“This common-sense legislation would prohibit these entities from inappropriately using NIL agreements to reduce their own tax obligations,” Thune said in a statement. “These basic taxpayer guardrails would protect athletes, strengthen NIL, and uphold the responsible stewardship of taxpayer dollars.”

The new bill follows a policy change last year at the National Collegiate Athletic Association, the which governs college athletics, allowing student athletes to take endorsement deals with brands to use their name, image or likeness. That decision came after the US Supreme Court last year ruled unanimously against the NCAA in a case student athletes brought against the organization to allow them to profit from their appearance and performance.

“In this new NIL era, we want to ensure that the opportunities available for student athletes to benefit from their own name, image and likeness are protected,” Cardin said. “We also have an obligation to protect taxpayer funds, which means that charitable deductions should be reserved for charitable activities. Purposefully blurring the line between private expenses and charitable contributions dilutes both these efforts.”

The senators said that since the adoption of the NIL rules, some colleges have established ways to collect payments to pay student athletes while still generating tax write-offs for the donors, which is against the intended purpose of the charitable tax deduction.

There’s a big caveat -- and good news-- in the bill for those who want to contribute to their alma mater’s sports program. The legislation would apply to to individuals, organizations, and groups that pool money and direct funds to athletes, but would not apply to educational institutions.

It’s not yet clear if or when the bill could become law. There is a change it could be included in a year-end package of tax measures that the Senate could consider after the mid-term elections.