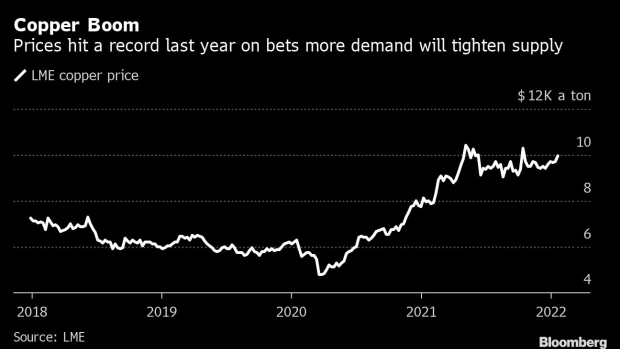 (Bloomberg) -- Canadian miner Teck Resources Ltd. bought a stake in a U.S. startup that can extract copper out of waste rock, as concerns mount about shortages of one of the metals key to the energy transition.

Teck joins BHP Group and Freeport-McMoRan Inc. as shareholders in Jetti Resources LLC, which has developed technology to release stranded metal from low-grade ores at new mines and existing waste piles. The startup gained more attention from major producers as copper prices hit a record last year on worries supply won’t be able to keep up with future demand.

The world’s biggest miners are bullish on the outlook for copper, expecting demand to climb as a greener world requires more of the metal in everything from electric vehicles to new power grids. Producers including BHP and Rio Tinto Group have been looking to add more supplies, both through new projects and making the most of exiting deposits.

Jetti, headquartered in Boulder, Colorado, said Tuesday that Teck has invested in the business and that the two were looking at ways to use its technology at Teck’s copper mines. It didn’t provide details on the size of the stake.

“We are excited to have an opportunity to demonstrate the significant commercial and environmental benefits which could be created from the application of our technology,” Mike Outwin, Jetti’s chief executive officer and co-founder, said in a statement.

Last year, BHP and Freeport became shareholders in the business after joining a group that agreed to invest $50 million. Japan’s Mitsubishi Corp. was already a major investor.

Jetti has developed a catalyst that can liberate copper from low-grade chalcopyrite ores -- which can have a metal content of well below 1% -- by disrupting the sulfur metal bond of the mineral. Traditional leaching methods, which dissolve the metal to form a weak solution of copper sulphate, lead to a film forming over the copper in these ores, preventing it from being extracted.