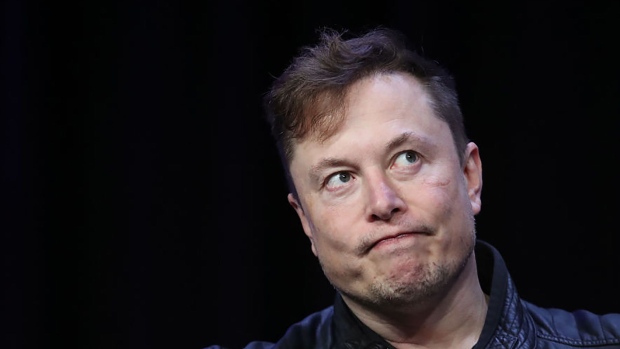 (Bloomberg) -- A new trove of text messages between Elon Musk and Twitter Inc. executives, close friends, potential investors and Silicon Valley bros sheds light on how a $44 billion deal by the world’s richest person to buy the social media company came about -- and ended up in court.

The texts show who wanted to be part of the buyout and reveal the inner circle’s musings on who should run the company if Musk did come to own it. They were disclosed as part of Twitter’s lawsuit to make Musk follow through on his $54.20-per-share offer, which is slated to go to trial in Delaware Chancery Court next month.

Among the many texts, Musk discloses that he “has a minor case of Covid” in late March, is usually “up until ~3 am” and no longer has a personal assistant.

Here are 10 glimpses behind the scenes.

1. Jack Dorsey, Twitter’s former chief executive officer, worked to get Musk to join the board shortly after activist investors starting agitating for change at the company in 2020.

“I tried my hardest to get you on our board, and the board said no,” Dorsey wrote. “That’s about the time I decided I need to work to leave, as hard as it was for me.”

Read More: Dorsey Tried to Add Musk to Twitter’s Board Well Before Deal

2. Musk’s relations with Twitter CEO Parag Agrawal went from friendly to frosty within a week. On April 5, Agrawal tweeted that Musk was being appointed to Twitter’s board -- and got Musk’s approval for the language of the tweet.

But by April 9, the tone had shifted dramatically. Agrawal upbraided Musk over his tweets disparaging the company.

“You are free to tweet ‘is Twitter dying’ or anything else about Twitter -- but it’s my responsibility to tell you that it’s not helping me make Twitter better in the current context. I’d like to provide your perspective on the level of internal distraction right now and how it [sic] hurting our ability to do work.”

“What did you get done this week?” Musk snapped back.

“I’m not joining the board. This is a waste of time,” he texted 40 seconds later.

“Will make an offer to take Twitter private,” he texted 15 seconds after that.

3. A few minutes later, Musk texted with Chair Bret Taylor about fixing Twitter. The texts suggest he already knew about Twitter’s bot problem, which he would later cite as a reason to abandon the deal.

“This is hard to do as a public company, as purging fake users will make the numbers look terrible, so restructuring should be done as a private company,” Musk wrote. “This is Jack’s opinion too.”

“Any interest in participating in the Twitter deal?” he asked. Ellison said yes. Musk asked how much.

5. Several of Musk’s friends had ideas on whom Musk should hire. Investor Bill Lee suggested Bill Gurley of Benchmark Capital. Jason Calacanis noted that “Twitter CEO is my dream job.”

6. Joe Rogan was a fan of the deal. “I REALLY hope you get Twitter,” the outsize podcaster texted. “If you do, we should throw a hell of a party.”

8. Gayle King of CBS asked Musk in April for an interview, saying buying Twitter was what the kids call a “gangsta move” and suggesting that Oprah Winfrey might want to join the board. King said she’d like a Twitter edit button.

9. Musk warned Calacanis against offering investment in the deal to “randos.”

It “makes it seem like I’m desperate,” he said.

Calacanis said he only wanted to be supportive: “You know I’m ride or die brother.”

10. In March, Sam Bankman-Fried, the crypto billionaire, tried to get in touch with Musk through an associate to discuss joining in a deal for Twitter. Musk appeared uninterested -- and unaware of Bankman-Fried’s wealth, asking, “Does he have huge amounts of money?”

Eventually he warmed to the idea, “so long as I don’t have to have a laborious blockchain debate.”

It’s unclear if they met.