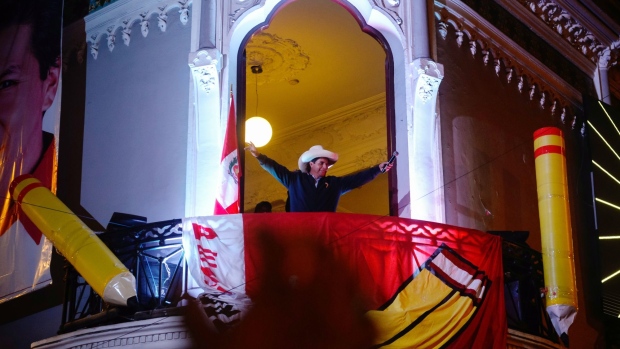 (Bloomberg) -- Tensions are rising on the streets of the Peruvian capital on Friday as supporters of the presidential candidates begin to lose patience as the vote count enters a fifth day, with official results showing leftist Pedro Castillo retaining a slim lead over Keiko Fujimori.

Supporters of Castillo began to gather in downtown Lima after reports that the Electoral Court was considering extending the deadline for parties to seek the annulment of suspicious ballots which already expired on Wednesday evening.

“If it’s true that the JNE is planning to extend the deadline to annul ballots, they’d be violating the electoral order,” Castillo wrote on his Twitter account, in reference to the court. “I call on the president of the JNE to respond to provide legal certainty to the process. Finally, I call on the Peruvian people to stay on alert.”

Fujimori has accused Castillo’s Peru Libre party of tampering with ballots and asked for the annulment of 200,000 votes and the review of another 300,000. The Electoral Court didn’t reply to requests for comment on whether they are considering an extension of the deadline.

Since Castillo emerged from relative obscurity to win the April 11 first round with a self-professed Marxist party, the campaign has been a battle of the extremes with Fujimori running on a conservative platform and warning that communism could be installed if she were to lose.

Those polar opposite views were expressed at the polls with most of Castillo’s support coming from the rural, Andean areas and Fujimori winning the largest urban areas including Lima. And now, with the vote count coming down to the wire, the potential for political violence has increased as uncertainty grows.

The Peruvian Navy was forced to respond to rumors running rampant on social media that a coup d’etat was being planned.

Castillo, for his part, has asked his supporters this week to remain calm and patient while the votes are counted and to not fall for provocations.

Observers from the Organization of America States, along with President Francisco Sagasti, both said they had seen no signs of widespread irregularities or fraud that would call into question the validity of the process.