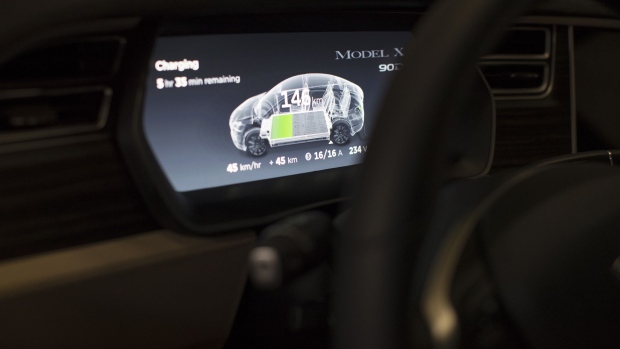 Battery charging status information is displayed on a dashboard screen inside a Tesla Model X sports utility vehicle (SUV) during assembly for the European market at the Tesla Motors Inc. factory in Tilburg, Netherlands, on Friday, Dec. 9, 2016. A boom in electric vehicles made by the likes of Tesla could erode as much as 10 percent of global gasoline demand by 2035, according to the oil industry consultant Wood Mackenzie Ltd. Photographer: Jasper Juinen/Bloomberg , Bloomberg

The company’s shares have rallied to record highs in recent days on the back of deals to secure supplies and customers, and China’s aggressive push into green energy and EVs. The major lithium-iron-phosphate battery supplier for Tesla’s China-made models, CATL is expected to increase sales after Elon Musk’s EV pioneer said it will shift to the cheaper battery for its standard range models to contain costs.

Rising commodities prices, including the materials used by CATL in its batteries, have spurred fears over the impact of inflation on manufacturers. To soothe supply chain constraints, CATL is seeking to be more active upstream and recently agreed to acquire Canada’s Millennial Lithium Corp. to secure supplies of the key battery-making mineral.