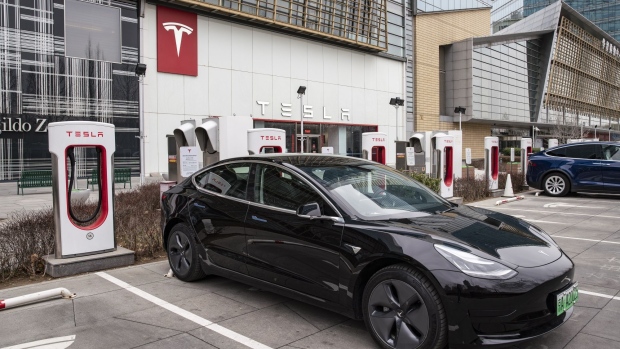 A Tesla Inc. electric vehicle is parked next to charging stations outside one of the company's showrooms in Beijing China, on Saturday, March 6, 2021 , Qilai Shen/Bloomberg

Tesla Inc.’s stock posted its biggest drop in a month after a fiery fatal crash of a Model S car over the weekend added to a broader pessimism about electric vehicle stocks.

Shares of Elon Musk’s automaker fell as much as 6.5 per cent in New York and came under renewed pressure at midday as the National Highway Transportation Safety Administration said it had launched a probe into the crash. While investigators are zeroing in on circumstances unique to the accident, industry watchers have been concerned that EV startups may soon lose their competitive edge, as mass-market rivals like Mercedes-Benz AG and Stellantis NV roll out their own models.

Stellantis said last week it will accelerate its shift to EVs, and vowed that battery-driven cars will account for more than a third of its European sales by mid-decade. Italian supercar maker Ferrari NV plans to unveil its first entrant in 2025, and Mercedes-Benz has already debuted the EQS, the first all-electric car that the 94-year-old company will sell in the U.S.

Tesla’s lead in global battery-electric-vehicle sales slipped 1 percentage point to 24 per cent in 2020 from 2019, according to an April 14 report from Bloomberg Intelligence analyst Kevin Tynan. Meanwhile, “the share of the VW Group rose to 9 per cent from 4 per cent in 2019, on track to overtake Tesla in 2023 and a sign that established automakers may quickly gain once committed to the drivetrain technology.”

Amid this backdrop, shares of Elon Musk’s Tesla dropped to as low as US$691.80 in New York, recording their biggest intraday decline since March 18. Smaller EV stocks were also down, including Nikola Corp., Workhorse Group Inc., Lordstown Motors Corp. and Fisker Inc. 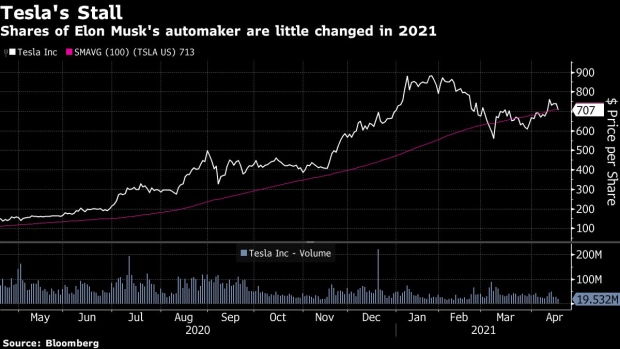 Tesla’s decline was spurred by the crash of a 2019 Model S late Saturday in Texas, which erupted into flames and killed the two passengers. Local authorities said “no one” appeared to be driving, with neither of the victims found in the driver’s seat. Tesla previously faced criticism from federal officials for fire risks related to the battery packs in its cars and for not doing enough to keep drivers from using its driver-assist function inappropriately.

More recently, Tesla’s stock price has been rocked by mixed headlines on Wall Street. While one of Cathie Wood’s Ark Investment Management funds said last week it sold some shares, Goldman Sachs recommended buying the stock as it raised the forecast for EV sales penetration.

The EV industry leader’s share price has been lackluster this year, with Tesla now little changed since the start of 2021, in stark comparison with 2020’s breathtaking rally. The company is scheduled to report first-quarter results on April 26.