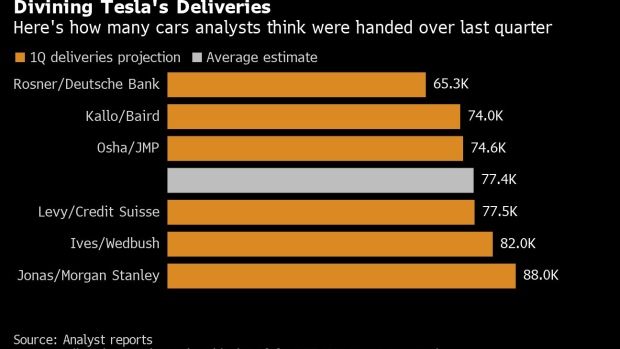 (Bloomberg) -- Tesla Inc. tends to pull out all the stops at the end of each quarter, with Chief Executive Officer Elon Musk often rallying the troops to deliver as many vehicles as possible to customers.

This approach probably didn’t work well for Tesla in March, with shelter-in-place orders and distancing guidelines around the globe limiting how many vehicles the company could hand over. While Musk tried to salvage the quarter by introducing a “touchless” delivery option in select locations, the coronavirus pandemic is expected to have done a number on demand for all automakers.

Analysts on average estimate Tesla delivered roughly 77,400 cars worldwide last quarter, the first to include hand-overs of the new Model Y crossover. While that would be a jump from a disappointing result a year ago, it also would mark a more than 30% drop from the record deliveries Tesla reported for the last three months of 2019.

“Tesla typically delivers a disproportionate share of its quarter’s units in the last two weeks of the quarter,” Adam Jonas, an analyst at Morgan Stanley, wrote in a report Monday. “Given the disruption to production and logistics bandwidth, we would be prepared for a weak number.”

Jonas, whose projection for 88,000 deliveries is the highest among six analysts surveyed by Bloomberg News, warned that risk to his estimate is “skewed to the downside.” He expects investors to turn their attention in the coming days to how demand shapes up in the second quarter, the amount of cash Tesla starts burning and the battery day event Musk has said will happen sometime in April.

Musk warned back in July -- long before the coronavirus outbreak -- that the first quarter of this year would be “tough.” Chief Financial Officer Zachary Kirkhorn echoed this during Tesla’s last earnings call in late January, noting that the auto industry is “always impacted by seasonality.”

While Tesla issued a forecast in January for 2020 deliveries to comfortably exceed 500,000, the company was “in the the early stages of understanding if and to what extent we may be temporarily impacted by the coronavirus,” he said.

The impact the virus has had on the industry has been far more severe and widespread than many were expecting then. Business activity in much of the U.S. and Europe has virtually ground to a halt, and Tesla’s factory in Fremont, California, suspended production on March 23. Countless would-be car buyers are staying home, unemployment is rising and consumer confidence is plummeting.

Tesla issued an “operational update” on March 19 to announce the plant shutdown and the touchless delivery offering, in which customers can unlock their new car using an app and complete any paperwork sitting inside. Other automakers are promoting similar services, though Tesla may have an advantage by having embraced an online sales model.

While the company didn’t comment on its guidance for 2020 deliveries in that update, it did say the $2.3 billion raised in a February equity offering left it with a sum of cash that will be “sufficient to successfully navigate an extended period of uncertainty.”

Tesla did still deliver some cars as the quarter came to a close, even to areas hit hard by the virus. Howard Feinstein, who lives in a rural community outside Seattle, took delivery of his $69,200 Model Y Performance on March 28. Two Tesla employees dropped off the vehicle directly to his house.

“Tesla went out of their way to make sure that we didn’t have any contact,” Feinstein said in a phone interview. “We went over the plan by phone prior to their arrival, and the employees always stood more than 10 feet away from me.”

Tesla is far from alone in idling production in the U.S., and the company now has a second plant, near Shanghai, that restarted assembly lines with the help of government authorities in China. The carmaker typically doesn’t give a breakdown in its deliveries reports of results by country or region.

“Given that China was shut down in February and probably slow in March, plus the U.S. froze in March, I’m expecting horrible numbers from everyone,” David Whiston, a Morningstar Inc. analyst, said in an email. “China and the U.S. were 64% of Tesla’s revenue last year for the full year, so a collapse there will be painful.”

Tesla shares, which closed up as much as 112% for the year in mid-February, briefly gave up all 2020 gains when equity markets reached a low point midway through the month. The stock was back up 25% as of Tuesday’s close.

“We think impacts of current production downtime are beginning to be incorporated into estimates, but are monitoring longer-term virus ramifications, including the potential for a global recession,” Ben Kallo, a Robert W. Baird & Co. analyst, wrote in a report Tuesday. “We think a longer-term economic downturn could adversely impact demand for several quarters, which could be an overhang on shares.”