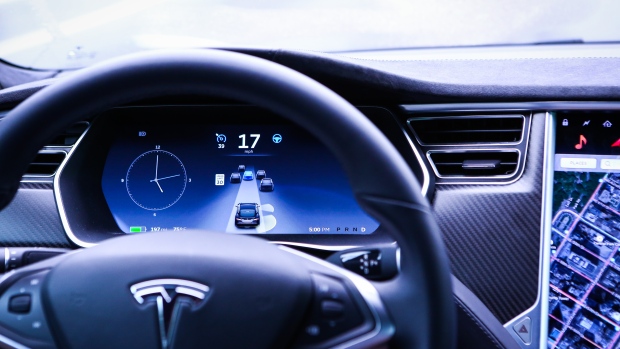 An instrument panel illustrates the road ahead using Autopilot technology just prior to the Tesla Motors Inc. 8.0 software update inside a Model S P90D vehicle in the Brooklyn borough of New York, U.S., on Monday, Sept. 19, 2016. , Bloomberg

Tesla Inc. shares were volatile on Monday ahead of a decision by S&P Dow Jones Indices on how it plans to add the electric vehicle company to its benchmark.

Tesla’s US$554 billion market cap poses a challenge for addition into the index, prompting the S&P to request feedback from the financial community on whether to include the stock all at once on Dec. 21 or break it in over two days -- which would be a first in S&P history.

An S&P spokesperson said the decision will be announced at 5:15pm New York time on Monday.

The company’s impending entry to the group of 500 companies has led to a buying frenzy in its stock and on those of other upstart electric vehicle makers, leading to a more than 40 per cent jump in the company’s share price just since Nov. 16 when the decision was announced. Tesla shares rose as much as 3.81 per cent to touch a record high of US$607.80, and then dropped 5.3 per cent. Currently they are trading down 0.5 per cent. 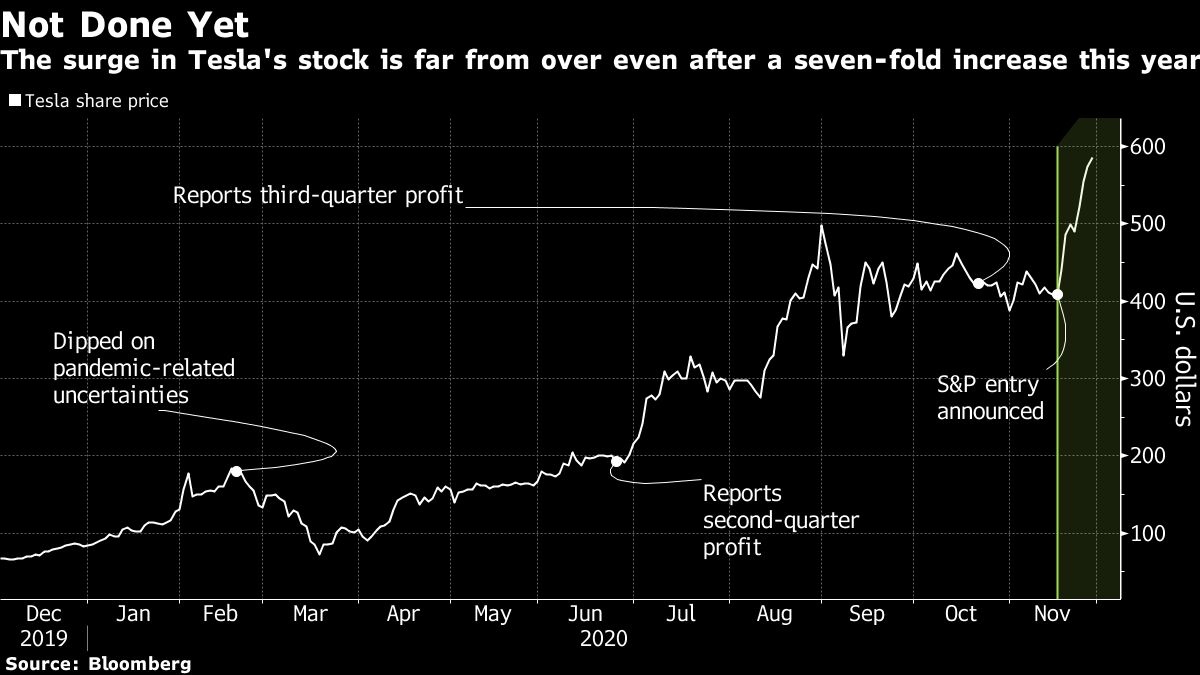 Whichever way it is added, Tesla’s inclusion in the prestigious index will be a big event for money managers. Its current size - Tesla would fit between Berkshire Hathaway Inc. and Facebook Inc., the fifth and sixth biggest index members - means managers of index-tracking funds will have to sell stocks of several other companies to make room for the newcomer in their portfolio, leading to a lot of shuffling.

Earlier this month, analysts at Goldman Sachs Group Inc. said the move could result in US$8 billion of demand from active U.S. large-cap mutual funds. That would represent about 1.5 per cent of Tesla’s current market value.

“The most likely scenario remains two inclusion tranches of 50 per cent each, on Dec. 14 and Dec. 21,” said Gary Black, who was chief executive of Aegon Asset Management from mid 2016 through September, and now holds Tesla as a private investor. Black expects the stock to run up ahead of the first inclusion, and then retreat about 10 to 20 per cent, a pattern he said would be consistent with what happened with Facebook Inc.’s shares after its entry into the S&P 500 Index in Dec. 2013.

“Big question is how many shares of Tesla will actually be needed by money managers,” Black said. The investor estimates managers overseeing index-tracking funds of about US$5 trillion will require 120 million shares to match up the company’s expected 1.4 per cent index weighting. Tesla currently has about 948 million shares outstanding and a free float of about 758 million.

Black is bullish on Tesla and has a US$720 price target on the stock over six to 12 months. That would represent a 23 per cent rise from Friday’s close.

Tesla on Monday also won Chinese approval to start selling its Shanghai-assembled Model Y SUVs in the country, a development that can further add to the already-high investor optimism.

Meanwhile, electric vehicle startup Nikola Corp. suffered a setback on Monday, as General Motors Co. scaled back a partnership with the company, scrapping a tentative deal to jointly build an electric pickup truck and replaced it with a non-binding deal to supply hydrogen-fuel technology.