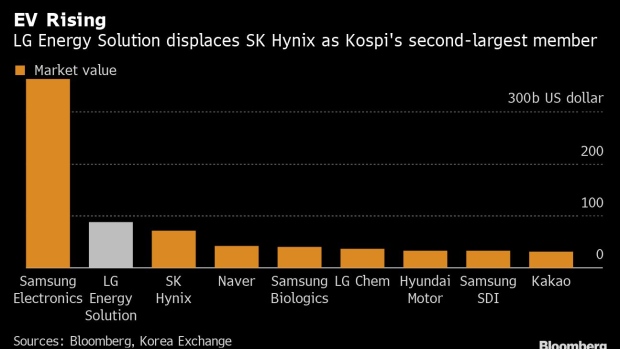 An LG Energy Solution Co. battery cell for electric vehicle (EV) at the InterBattery 2021 in Seoul, South Korea, on Wednesday, June 9, 2021. Global electric-vehicle battery sales more than doubled in the first four months of the year as the switch to environmentally-friendly cars gathers pace. , Bloomberg

(Bloomberg) -- LG Energy Solution has become South Korea’s second-largest listed stock after entering the benchmark index Friday at a valuation of $98 billion, hinting at a gradual shift after years of market dominance by chipmakers.

The supplier of batteries to electric-vehicle makers including Tesla Inc. displaced semiconductor maker SK Hynix Inc. from a position it held since 2016. Samsung Electronics Co. retains the top spot comfortably, with its $360 billion market cap.

As Korea’s largest-ever IPO, LG Energy Solution disrupted the secondary market even before it started trading by sapping liquidity from elsewhere. Supply-demand for the stock has been extremely tight as its parent LG Chem Ltd. retains a stake of over 80%, while institutional investor bids for the offering reached $13 trillion. Retail demand also set a record high.

The stock fell about 10% Friday, pulling back after its 68% opening-day pop. Fluctuations are expected to continue amid high demand for EV plays as well as its addition to other indexes and exchange-traded funds over the next several weeks.

The Kospi entered a bear market this week, hurt by drops in the chipmakers amid concerns over upcoming U.S. interest-rate hikes as well as the fund-drain from the battery maker’s IPO. LG Energy Solution’s listing adds to the growing influence of EV-related companies including SK Innovation Co. and Samsung SDI Co. in Korea’s market.

“As the Korean battery industry’s growth catches up to the size of the memory chip industry, the South Korean market is at the start of structural change,” said Hwang Kyu-Won, an analyst at Yuanta Securities Korea Co. Still, given current company profit levels, “it seems premature to give LG Energy Solution a higher value than SK Hynix.”