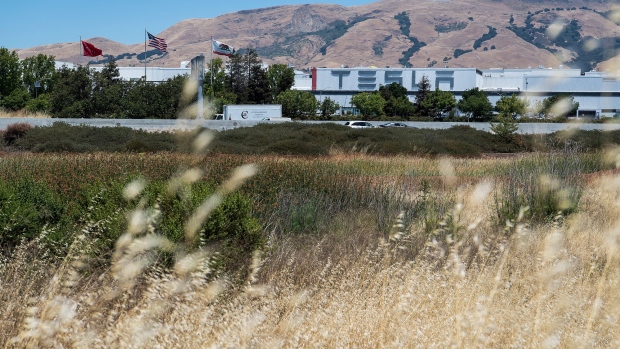 The electric carmaker claims a California man who it says is part of an online group of short sellers has been stalking its Fremont factory and harassing its employees -- including dangerously swerving his car toward a Tesla Model 3 that was on a freeway test drive and injuring a Tesla security guard in a hit-and-run on company property.

Tesla persuaded a state court judge on Friday to issue a temporary restraining order requiring the man to stay at least 100 yards away from its factory and employees.

The bizarre events described in court filings, first reported by the website Electrek, prompted a tweet from Musk on Saturday.

Ten minutes later came a response from the Twitter handle @skabooshka -- the very account that Tesla says belongs to the man that’s been menacing its employees.

Tesla claims it was able to identify the harasser as Randeep Hothi from the license plate of the vehicle he drove -- and that it also traced Hothi to the Twitter account he allegedly shares with his brother that frequently tweets with the hashtag “$TSLAQ" in solidarity with others who want to see the company fail.

Hothi’s behavior would likely cause “great or irreparable harm” absent immediate court intervention, the company said in its petition for the restraining order.

Hothi didn’t immediately respond Saturday to a request for comment. A legal defense fund set up for Hothi garnered $23,578 in contributions from 87 people in one hour, surpassing its goal of $20,000.

It’s not the first time that Tesla and Musk have gone to great lengths to stop what they perceive as threats to the company.

A former assembly line worker at Tesla’s Nevada Gigafactory who the company identified as leaking disparaging information to the media was accused by Musk of engaging in “extensive and damaging sabotage,” and Tesla’s public relations department spread rumors that he was homicidal.

In an earlier episode, Tesla sued an executive for an oil industry company whom it accused of impersonating Musk in an email to get nonpublic data about the automaker. That case ended with a confidential settlement.

Tesla claims that Hothi -- who it says lives less than three miles from its Fremont factory --had a history of trespassing at its facilities, taking photos and video to post to his Twitter account, before he recently started menacing its employees.

In February, the company said in a court filing, a security guard on foot approached Hothi in his vehicle to ask him to leave the factory parking lot and Hothi’s car then hit the guard -- causing a minor knee injury -- before fleeing the scene. Tesla says it contacted Fremont police, but that officers were unable to deliver a no-trespassing order to Hothi.

On April 16, the company alleges, Hothi was behind the wheel of an Acura that variously drove ahead of, beside and behind a Tesla-owned Model 3 on the freeway for a period of 35 minutes -- while Hothi was taking pictures of the Model 3. The Acura swerved so close to the Model 3 that the vehicle’s side-collision safety feature engaged in an emergency maneuver to avoid a collision, according to the court filing.

The Oakland judge set a hearing for May 7.

To contact the reporter on this story: Peter Blumberg in San Francisco at pblumberg1@bloomberg.net

To contact the editors responsible for this story: Elizabeth Wollman at ewollman@bloomberg.net, Craig Trudell, James Mayger