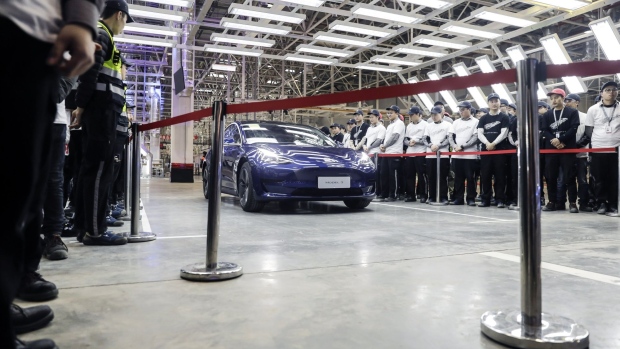 A Tesla Inc. Model 3 vehicle set to be delivered to a company employee moves off an assembly line during a ceremony at the company's Gigafactory in Shanghai, China, on Monday, Dec. 30, 2019. , Bloomberg

Tesla Inc. is considering cutting prices of some of its cars in China for a second time this year so they will continue to qualify for government rebates on electric vehicles that are being tightened, according to people familiar with the matter.

The cut would bring prices of the standard version of the sedan below the 300,000 yuan maximum threshold for electric cars in China to qualify for subsidies, the people said, asking not to be named as the move hasn’t been publicly announced. That would mean a reduction of more than 7.3 per cent.

The plan has been submitted to the Chinese government as carmakers typically provide advance notice on such matters to authorities, though it’s up to Tesla whether it will go ahead with it, one of the people said.

No final decision has been made, including the timing of Tesla’s price cut, but it could coincide with the company’s introduction of Model 3s equipped with cheaper batteries from local supplier Contemporary Amperex Technology Co. Ltd., one of the people said.

Representatives at Tesla, whose plant near Shanghai is its first outside of the U.S., and CATL declined to comment.

Tesla has been planning since last year to significantly reduce prices of its cars in the world’s largest EV market by increasing the proportion of local components and reducing costs, people familiar with the matter said in December.

But the government is making it harder for cars to qualify for subsidies through criteria such as price caps, bringing new urgency to the remaining price reductions, according to one of the people. In January, the company lowered the China-made Model 3s starting price by 9 per cent.

For Tesla, which began making cars in China this year, qualifying for the rebates would help it stay competitive against local rivals and global giants such as Volkswagen AG, which are also debuting new models into a market that was already declining before the coronavirus pandemic hit consumer demand.

Government subsidies, which can knock thousands of dollars off a car’s sticker price, have become more critical in sustaining EV sales than authorities had anticipated. A reduction in the benefits last year triggered a downturn in sales that the industry has yet to recover from.

This year was supposed to be a watershed for China’s EV market, with the likes of national champion BYD Co., Daimler AG and General Motors Co. scheduled to roll out new models and open plants in China, where the government has staked its claim on being the global leader in electrification.

Then the coronavirus came along, short-circuiting demand for cars of every sort and leaving EV makers with, at best, a dream deferred.

Registrations of Tesla vehicles in the country climbed to a record in March after dropping for two consecutive months amid a broader market slump that has been exacerbated by the coronavirus outbreak.

China has announced it would extend tax breaks and subsidies on electric-vehicle purchases for two years to provide relief for the struggling industry in the wake of the coronavirus pandemic. But the subsidies will be lowered and the universe of cars that qualify for the discounts will be narrowed as the government seeks to gradually phase out handouts.

Some of the rebate reductions began in April and will be tightened in the summer. That’s already caused a bump in the price that consumers pay for the cars, though Tesla hasn’t changed its sticker prices.