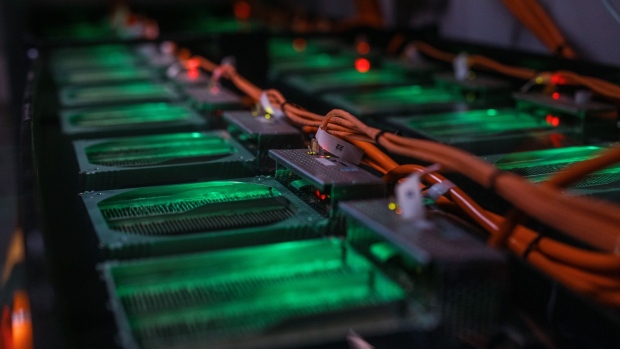 Mining units at the Cormint Data Systems Bitcoin mining facility while under construction in Fort Stockton, Texas, U.S., on Friday, April 29, 2022. Cryptocurrency miners who have descended on remote parts of Texas to feast on cheap electricity and inexpensive land are finding themselves surrounded by dusty fields with hardly any residential housing. Photographer: Jordan Vonderhaar/Bloomberg , Bloomberg

(Bloomberg) -- The growth in Texas crypto-mining capacity will be stunted as Russia’s war on Ukraine drives up global energy prices and Bitcoin prices languish, according to an industry group.

Mining capacity in the Lone Star State will increase by 2 gigawatts to 3.5 GW by the first quarter of 2024, rather than the former forecast of up to 5 GW, said Lee Bratcher, president of the Texas Blockchain Council.

The “double compression effect” of higher electricity prices and declining cryptocurrency values means it’ll take longer to bring online the huge queue of mining projects set to connect to the state grid, Bratcher said at a conference on Monday.

“It’s going to increase slower than we thought because the war on Ukraine had pushed energy prices up,” Bratcher said at the Gulf Coast Power Association gathering the state capital of Austin.

Even at a scaled-back pace, crypto is helping push Texas electricity usage to unprecedented heights. In recent months, power demand soared to all-time highs almost a dozen times, prompting the Electric Reliability Council of Texas to urge businesses and households to curtail usage to avoid shortages. Miners have argued that they are super sensitive to power costs and voluntarily curtail operations to aid the state’s grid.