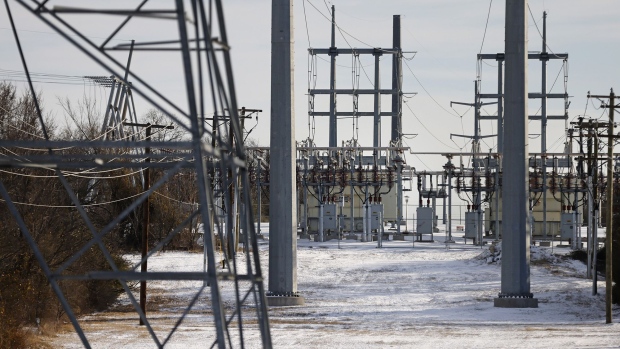 Transmission towers and power lines lead to a substation after a snow storm on February 16, 2021 in Fort Worth, Texas. , Photographer: Ron Jenkins/Getty Images

(Bloomberg) -- The main grid operator for Texas said the vast majority of its power-generating units are in compliance with new rules that require them to be able to operate during winter weather.

The Electric Reliability Council of Texas found that 10 generators out of the 302 inspected didn’t meet the standards, according to a report filed with state regulators on Tuesday. As of Jan. 17, all but three of those deficiencies have been addressed, the report said.

Those three units have a total capacity of 532 megawatts, or about 0.4% of the Ercot generation fleet, the report said.

Texas power regulators put the new winterization requirements in place after a deep freeze took down scores of power plants last year, resulting in catastrophic blackouts that left more than 200 people dead. Temperatures in wide swaths of the second-largest U.S. state are forecast to plunge to well below normal in coming days and may test the grid’s ability to handle a freeze.

“The Texas electric grid is more prepared for winter operations than ever before,” Brad Jones, Ercot’s interim chief executive officer, said in a statement.

The units inspected by Ercot represent 85% of the power lost during last year’s winter storm.