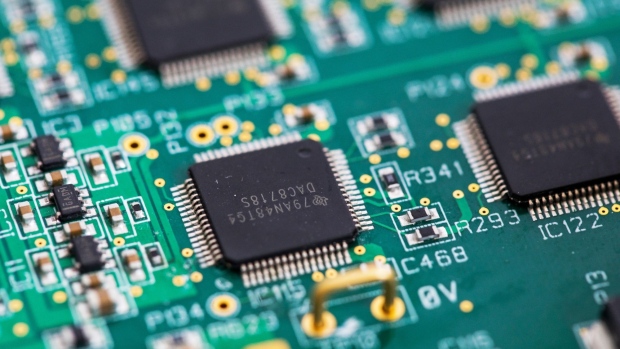 (Bloomberg) -- Texas Instruments Inc. gave a forecast in line with analysts’ estimates for the current period, suggesting that a surge in demand for the electronic components is beginning to slow.

Sales will be $4.22 billion to $4.58 billion in the fourth quarter, Texas Instruments said Tuesday in a statement. Profit will be $1.83 to $2.07 a share. On average, analysts predicted profit of $1.94 a share and sales of $4.48 billion, according to data compiled by Bloomberg. The stock dropped more than 5% in extended trading following the release.

Investors are concerned that the double-digit percentage revenue gains that chipmakers have been posting are creating a bubble and that the huge increase in orders in recent months isn’t supported by commensurate demand for the devices that they go into. Texas Instruments has the broadest reach in the industry. Investors have been on the look out for a build up of inventory, typically the herald of downturn.

The Dallas-based company has tens of thousands of products and more than 100,000 customers who make everything from military hardware to factory equipment. The earnings reports of the largest manufacturer of analog and embedded processing chips are used as a bellwether for electronics demand.

Texas Instruments’ executives have argued that its high level of in-house manufacturing has made the company more nimble in responding to the increase in demand. When competitors cut production last year, Texas Instruments increased output and built inventory. Many chipmakers outsource large amounts of their manufacturing, and some have never owned a plant of their own. Texas Instruments has factories that provide about 80% of its own needs.

Texas Instruments shares, which have kept pace with the overall advances by chip stocks this year, declined 1.6% to $196.98 at the close.