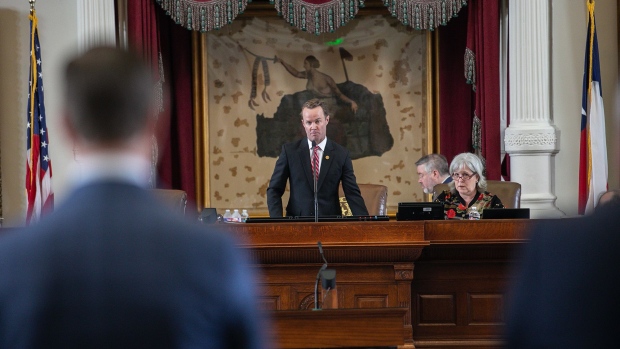 Dade Phelan (R-TX) (C) listens to U.S. Rep. Will Metcalf (R-TX) (L) move to issue a call of the House to try to regain a quorum on July 13, 2021 in Austin, Texas. , Photographer: Montinique Monroe/Getty Images

(Bloomberg) -- Texas’s legislature may revisit the state’s controversial law that bans abortions even in cases of rape and incest.

Speaker of the House Dade Phelan said Friday that abortion legislation may come up in the 2023 session regarding exceptions for when the mother is the victim of rape or incest. The legislature meets every other year and will reconvene in January. Still, Phelan wasn’t sure what support there would be in a state house and senate likely to be led again by Republicans.

“I’ve heard from members who are concerned there are no exceptions,” Phelan said in an interview at the Texas Tribune Festival in Austin.

The speaker’s comments come amid an intense national debate on abortion following the US Supreme Court overturning Roe v. Wade. The Texas trigger law, which was passed by the legislature in 2021, outlawed abortion except when the mother’s life was in danger.

Polls have shown that the state law is at odds with the views of most Texans. A majority of Texans support abortion exceptions for pregnant women who are victims of rape and incest, according to a June survey by the Texas Politics Project and University of Texas at Austin.