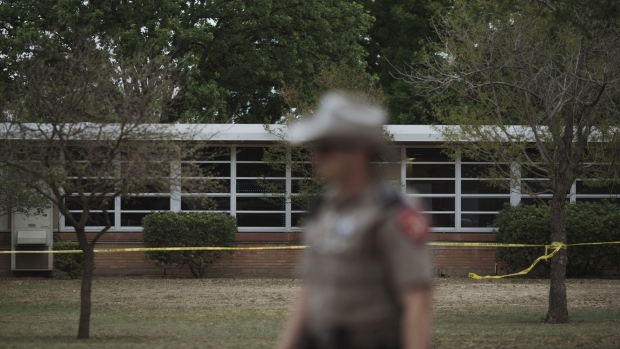 A Texas state trooper outside Robb Elementary School in Uvalde, Texas, US, on Tuesday, May 24, 2022. Fourteen students and one teacher were killed during a massacre in a Texas elementary school, the deadliest US school shooting in more than four years. , Bloomberg

(Bloomberg) -- Police in Texas initially didn’t try to break down the classroom door where 19 children were killed because they believed the gunman was barricaded alone and that no one was at risk.

It was the “wrong decision” not to break into the classroom where children were being killed, said Steven McCraw, director of the Texas Department of Public Safety.

“From the benefit of hindsight, where I’m sitting now, of course it was not the right decision,” he said. “It was the wrong decision.”

Law-enforcement officials have faced mounting questions and outcry from parents and the community on the police’s response to the massacre.

The shooter got into the school through an exterior door that had been propped open by a teacher, McCraw said. The suspect had purchased 1,657 rounds of ammunition, and had 58 magazines at the school, McCraw said. He fired more than 100 rounds during his attack.

McCraw provided a detailed timeline of the incident, correcting some statements made earlier in the week. He also read the 911 calls from teachers and children, becoming choked up while reading the comments from kids asking for help.