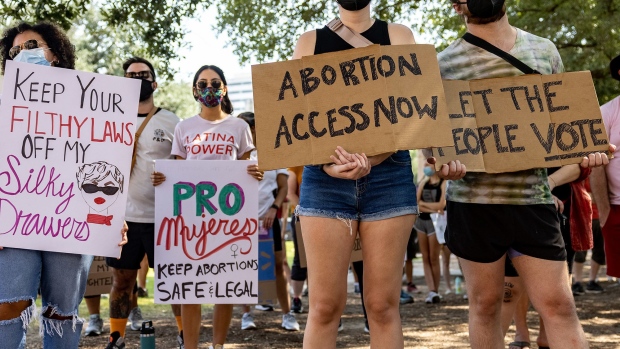 (Bloomberg) -- Technology leaders across Texas have been privately meeting for weeks, discussing how to best combat the state’s new abortion law and challenge a cultural shift they believe will make it difficult to attract top talent. Absent from the discussion: Big Tech.

Apple, Amazon, Google, Facebook, Tesla and Microsoft have shifted tens of thousands of high-paying jobs to Texas in recent years amid a state-wide economic boom. Oracle and Hewlett Packard Enterprise moved their headquarters to the state during the pandemic. And Tesla is expanding operations just outside of Austin.

Although most of these companies spoke out against the state’s controversial shifts to restrict voter-rights and eliminate mask mandates in public schools, they are not stepping up to oppose the abortion ban to the frustration of their Texas tech brethren who see the law as hostile to human rights and the ability to conduct business in the state.

“We have to stop doing stuff like this,” said Josh Baer, founder of Austin-based startup accelerator Capital Factory, which is helping to spearhead a grass-roots initiative to take on the issues. “It’s terrible for business and for the image of what we are trying to convey. This is not going to make more people want to move here.”

John Berkowitz, chief executive officer of Ojo Labs, is one of dozens of tech leaders in the state who is working with the Capital Factory initiative. He’s also one of dozens of CEOs that in recent week committed to “Don’t Ban Equality,” a petition originally written in 2019 but updated to protest Texas’s newest abortion law.

Citing research from the Institute for Women’s Policy, the pact pegs the economic losses in Texas that will result from the abortion ban at $14.5 billion a year, based on the impact it will have on the labor force and earnings.

The deadline to sign the new version of “Don’t Ban Equality” was Friday, but the group extended it through the weekend hoping to attract at least a few Big Tech names. Bloomberg LP, the parent company of Bloomberg News, was among earlier signatories.

“Their silence is notable,” said Jen Stark, senior director for corporate strategy at the California based Tara Health Foundation, which focuses on reproductive and maternal health. The group is managing the petition drive along with Planned Parenthood Federation of America, NARAL Pro-Choice America, The American Civil Liberties Union, and the Center for Reproductive Rights. “We’re not asking companies to weigh in on when life begins. We’re asking them to acknowledge this affects their workforces.”

Hewlett Packard Enterprise Co. spokesman Adam Bauer told Bloomberg News that “HPE encourages our team members to engage in the political process where they live and work and make their voices heard through advocacy and at the voting booth.”

Stark said about five dozen companies had signed the new version of the petition, and she anticipates making an announcement on Tuesday highlighting the most recent corporate additions. “Don’t Ban Equality” encourages companies to support workers who need access to reproductive health care and to speak out publicly against the ban.

Samantha Lewis, a venture investor with Houston-based Mercury Fund, is among those who recently signed the petition. She said although the abortion restrictions outrage her personally—and makes her job recruiting tech talent to the state harder—she refuses to abandon Texas.

“I’m not going to leave the state and leave the fight” for other people to handle, she said. “We’re working on it.”

Some tech companies have publicly opposed the abortion ban. Lyft and Uber both set up legal defense funds for drivers and donated $1 million to Planned Parenthood. Salesforce offered to relocate any employee worried about not being able to access reproductive health care in their state. Texas-based Bumble and Match announced they’d set up relief funds for effected women.

Tyson Tuttle, chief executive of Austin-based Silicon Labs, said Big Tech leaders need to call Texas Governor Greg Abbott and implore that “what you’re doing is making it impossible for me to move to Texas because I’ll have a revolt on my hands from employees who are minority or female.”

Tuttle said his company, which employs about 900 people in Austin, expects to recruit more heavily outside the state as a result of the law because talented workers won’t want to call Texas home.

Tuttle said he’s watched state laws become increasingly “draconian” even as some of the most powerful companies in the world have gone silent. A 2017 bill impacting transgender students quickly became a hot topic for him and other tech leaders. He and more than dozen other leaders, including the heads of Amazon, Apple, Facebook, Google and Microsoft, formally opposed the bill in a letter to Abbott, saying it was discriminatory and ran against their values of “diversity and inclusion.”

Bret Hurt, the CEO of Austin-based Data.world said he still hopes to rally more companies to push back against the cultural shift sweeping the state.

“It’s tone deaf given the goal of many companies to increase representation in technical roles and at higher levels of the organization,” he said. “We need for people in California and New York to not give up on us. If they pull out of here and just say ‘screw you,’ how does that help push any agenda forward?”