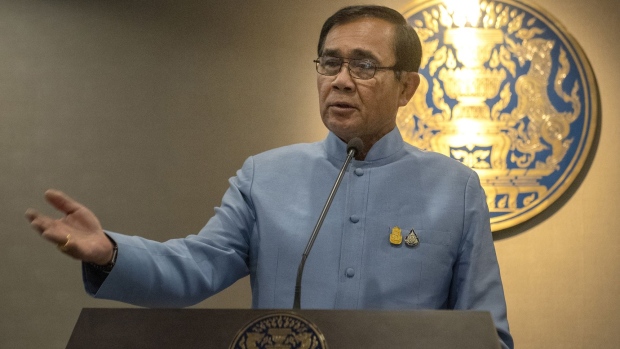 (Bloomberg) -- Thailand’s ruling Palang Pracharat party joined the main opposition party to reverse an earlier parliament decision on electoral rules in a rare move, effectively undermining the ability for smaller parties to win seats in the next elections.

On Wednesday, a joint session of parliament failed to meet a quorum to consider a bill that would set key rules for the election that must be called by late March next year. This effectively reverses the change lawmakers agreed on last month that would have helped Prime Minister Prayuth Chan-Ocha and smaller parties in his coalition.

Thailand will now revert to an earlier version of the draft bill, which would require smaller parties to clinch more votes to get one of the 100 party-list seats up for grabs in the 500-member House of Representatives in the elections.

The u-turn is the latest attempt by Thailand’s royal establishment to fine-tune election rules that have been heavily stacked in favor of the military and its allies, who won the 2019 election after the Constitution was rewritten in the aftermath of the 2014 coup.

“The ruling coalition initially thought the change would help them take seats away from a big party like Pheu Thai, but eventually they realized they didn’t really stand to benefit so much,” said Yuttaporn Issarachai, a political scientist from Sukhothai Thammathirat Open University.

“The electoral system will still favor Prayuth, largely owing to the role of the Senate, and the coup leaders’ extension of power after the next election is still highly likely,” he added.

According to the 2017 Constitution, the military-allied Senate will retain an ability to vote for the prime minister for one more year after the government’s four-year term.

The reversal is still subject to procedural steps before it becomes official as it requires the approval from the Election Commission and a royal endorsement.

Currently, the country has a modified version of the mixed-member proportional representation, which is practiced in Germany and New Zealand. The electoral changes will make it easier for a single party to gain a majority in the house.

Thailand has re-adopted a two-ballot system, with one vote cast for a constituency candidate and another for a party. The new system, also known as parallel voting, will mean parliamentary seats are allocated first to winning constituency candidates and the 100 party-list seats are divided based on the proportion of votes that each party receives.