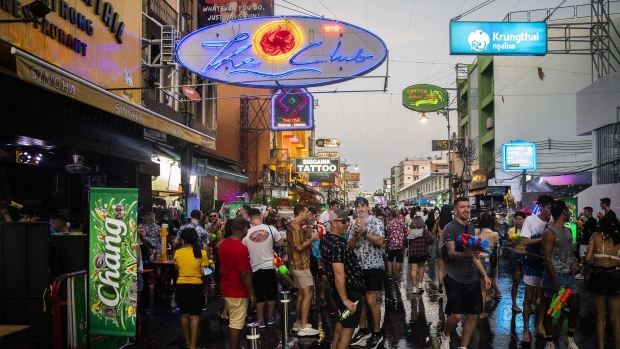 BANGKOK, THAILAND - APRIL 13: Thai tourists and locals celebrate Songkran by spraying each other with water guns and partying on Khaosan Road on April 13, 2022 in Bangkok, Thailand. Songkran, the traditional Thai New Year's Festival, is celebrated each April, Thailand's hottest month of the year. During Songkran, locals and tourists celebrate by partaking in water fights throughout the country. This year, despite the Thai government officially banning water fights due to the rise in Covid-19 cases, revelers joined party's on Khaosan Road and at a pro-democracy rally near Democracy Monument. (Photo by Lauren DeCicca/Getty Images) , Photographer: Lauren DeCicca/Getty Images AsiaPac

(Bloomberg) -- The pace of Thailand’s economic recovery, spurred by more tourism, is giving the country’s central bank more scope to raise interest rates to fight inflation, according to the World Bank.

Southeast Asia’s second-largest economy is likely “to gain momentum and reach pre-pandemic levels in the fourth quarter,” driven by the drop in Covid-19 cases and relaxation of border restrictions, according to a report Wednesday.

“Thai rate normalization can start soon, so they can raise the policy rate in a gradual pace in line with the economic recovery,” Kiatipong Ariyapruchya, World Bank senior economist, said at a briefing in Bangkok. Fighting inflation, now at a 14-year high, is important as it risks putting more Thais into poverty, especially with food and energy prices under pressure from the war in Ukraine, he said.

“As Thailand moves into the recovery phase, it will be important to make progress on fiscal consolidation while rebalancing public spending towards public investment to help support the government’s vision to build back better and greener,” Kiatipong said.

Thailand’s monetary-policy committee kept its key interest rate unchanged at a record low 0.5% for a 16th straight meeting in a split decision early this month. Still, minutes from the decision said that further delays to dealing with inflationary pressures may cause “greater costs” to the economy.

The World Bank sees gross domestic product expanding 2.9% this year. In a separate report, Moody’s Analytics forecasts GDP growth of about 3.5% in 2022, “with robust exports and the return of foreign tourists supporting the economy.”

“Although some central banks in the region have hiked rates a number of times, BOT is coming to normalization very gradually,” Eric Chiang, associate economist at Moody’s Analytics, said in the report Tuesday. “That leaves the next scheduled meeting on August 10 as the likely timing of its first rate hike.”

A week baht is another factor supporting the case for normalization, according to the Moody’s analyst. The Thai currency weakened slightly as of 2:30 p.m. local time Wednesday, to 35.17 per dollar. It’s dropped about 3.5% versus the greenback this year.