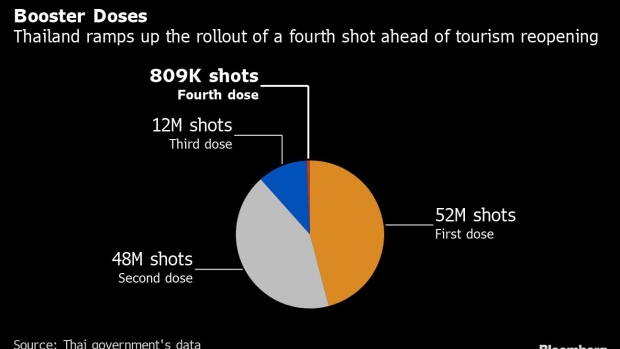 Prepared doses of the Pfizer-BioNTech Covid-19 vaccine at a vaccination center set up at the Bang Sue Grand Station in Bangkok, Thailand, on Monday, Dec. 20, 2021. Thailand is on course to surpass its goal of administering 100 million doses of Covid-19 vaccines this year, boosting its defense against the omicron variant, as the Southeast Asian nation ramps up vaccination. Photographer: Andre Malerba/Bloomberg , Bloomberg

(Bloomberg) -- Thailand is ramping up the rollout of fourth Covid-19 shots to residents in its tourism-dependent regions as the nation gears up for border reopening next month.

Authorities are offering AstraZeneca and Pfizer vaccines in Bangkok, Phuket, Krabi and seven other provinces to those who have received their third dose at least three months ago, the health ministry said. The Southeast Asian nation has already administered more than 800,000 fourth doses, mostly to healthcare workers and those in high-risk groups, official data showed.

Thailand is among a short list of countries including Chile and Israel that are offering the fourth shot.

Thai officials said the rollout of the fourth shot would help the country’s efforts in providing some protection for local communities and in reopening its tourism sector. Starting on Feb. 1, Thailand will resume its quarantine-free tourism program that helped bring in some 350,000 visitors in two months, before the plan was temporarily suspended due to concerns over the spread of the omicron variant.

About 17% of Thailand’s almost 70 million population have received three doses of vaccines, while 69% have received at least two shots. The country reported 7,139 new infections on Monday, a third straight day of decline.