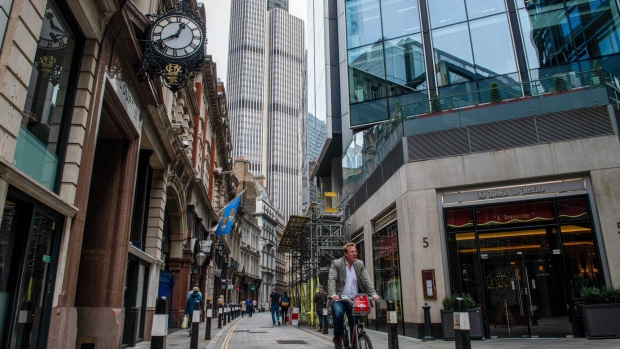 Skyscrapers in the City of London, UK, on Friday, Sept. 23, 2022. The UK Government wants to supercharge the City of London's growth, arguing it will boost the whole country's post-Brexit prospects. Photographer: Chris J. Ratcliffe/Bloomberg , Bloomberg

Investors are turning away from the UK as a result of the last month’s political chaos. And what about British business leaders? The fallout from the mini-budget could be turning them toward Labour.

“The Tories have always been the party of sound money, but the problem with the mini-budget is it severely damaged that reputation for being good with business. That opens up much more room for Labour,” says Bloomberg Editor-in-Chief John Micklethwait, who joins this week’s episode of In the City podcast to debrief on Liz Truss’s performance at the conference.

David Merritt and Francine Lacqua speak with Lord Bilimoria, former chairman at the Confederation of British industry and founder of global beer brand, Cobra Beer, who says it all boils down to poor communication from the government. Pointing to the Tony Blair administration, Bilimoria says “we know Labour can be business friendly.”

And we hear from Francine’s conversation with Tiina Lee, chief executive officer, UK and Ireland at Deutsche Bank. Lee, who met with the Chancellor of the Exchequer Kwasi Kwarteng alongside other banking chiefs last month, said communication with the markets “was missing” around the plans.