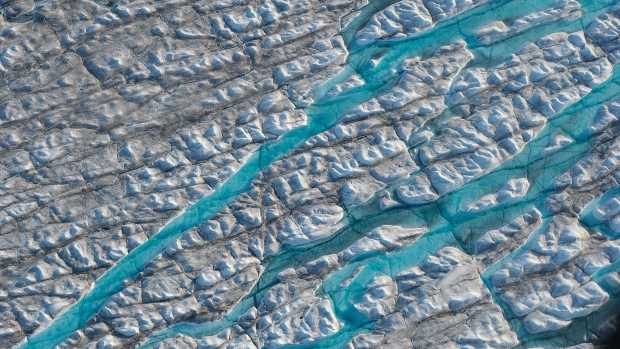 ILULISSAT, GREENLAND - AUGUST 04: In this view from an airplane rivers of meltwater carve into the Greenland ice sheet near Sermeq Avangnardleq glacier on August 04, 2019 near Ilulissat, Greenland. The Sahara heat wave that recently sent temperatures to record levels in parts of Europe has also reached Greenland. Climate change is having a profound effect in Greenland, where over the last several decades summers have become longer and the rate that glaciers and the Greenland ice cap are retreating has accelerated. (Photo by Sean Gallup/Getty Images) , Photographer: Sean Gallup/Getty Images Europe

Tell me if you’ve heard this one before: Climate change isn’t about what we know, it’s about what we don’t. What we know is bad enough, what we don’t is potentially much worse. Consider, also, the irreversible, large-scale events — tipping points, like the Amazon drying out, the West-Antarctic or the Greenland ice sheet disintegrating — and the costs start to add up

It’s precisely these costs of major planetary tipping points that I set out to calculate with three stellar colleagues in a paper published this week in the Proceedings of the National Academy. The main finding, heavily caveated as is the wont of any such research: A conservative estimate raises the urgency of action today by around 25%. The metric to capture this urgency is the social cost of carbon, what each ton of CO₂ emitted today costs society — and, thus, should cost those doing the polluting.

That 25% alone represents a significant impact, but we cannot leave things there. For one, it represents what we call a “probable underestimate,” for all sorts of important reasons, not least the fact that both the science and perhaps especially the economics are indeed inherently conservative.

Second, focusing on that 25% figure would miss perhaps the most important point of the exercise: We find that the impact of these tipping points is itself highly uncertain, with a very real possibility of much larger impacts. For example, we estimate a 10% chance that tipping points more than double the social cost of carbon.

We are, of course, hardly the first to zero in on tipping points. The late Columbia University geochemist Wally Broecker, who, in 1975, introduced the term “global warming,” drew attention to “unpleasant surprises in the greenhouse” in 1987. University of Exeter climate scientist Tim Lenton has written extensively about “tipping elements” and “tipping points.” The late Harvard University economist Martin Weitzman drew attention to the “fat tails” of climate change.

I, too, have written my share of arguments for why it’s these unknowns and perhaps “unknowables” that will drive the final outcome. Climate Shock, my book with Weitzman, is all about it. It might be in the very DNA of economics and economists to sideline these uncertainties, and we do so at our peril. Well, it turns out it’s relatively easy to critique. It’s quite another to actually sit down and attempt to do one better.

As with any research, it’s always good to note what this paper isn’t: It isn’t a quantification of any and all climate-related uncertainties. Far from it. In fact, it may not even capture the most important ones. There are good reasons to believe that extreme weather events like floods, droughts, or hurricanes may have much larger economic impacts than the kinds of large-scale planetary “tipping points” we focus on here.

One potential tipping point we examine is the disintegration of the West-Antarctic ice sheet. It would have enormous implications, raising global sea levels between 10 and 20 feet. That clearly wouldn’t happen tomorrow. In fact, when glaciologists refer to the disintegration of the West-Antarctic ice sheet happening potentially in “short order,” they imply it happening within centuries — all but tomorrow,  in geological timescales. That disconnect to what economists and the rest of us would call “short order” alone is an important distinction here and just one reason why climate-economic modeling is so difficult to get right.

Integrating tipping points makes it harder still. But there’s good reason why they feature so highly in both scientists’ and the public’s imagination. Triggering any or all of them truly pushes the planet outside a “safe operating space for humanity.” Stating that is important. Critiquing climate-economic models for ignoring them is, too. Our paper is clearly not the final word on this question, but it is the kind of enumeration that helps make the case for why it is precisely the risks, the uncertainties, the tail events, and, yes, the planetary-scale tipping points that should really drive climate action now.