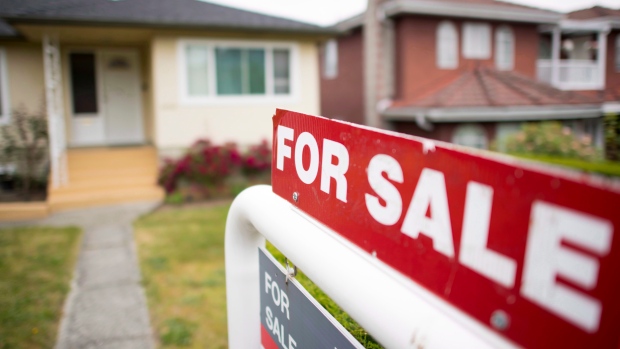 A real estate sign is pictured in Vancouver on June, 12, 2018. , THE CANADIAN PRESS/Jonathan Hayward

“There is a dark economic underbelly in this business that I want to expose.” Those are the words of Canada Mortgage and Housing Corporation CEO Evan Siddall in a letter he sent to Canadian lenders on Monday in which he urged them to “reconsider” dishing out mortgages to debt-laden households, according to our Bloomberg News partners who obtained the document. The call to action comes a little more than a month after CMHC, the country’s largest mortgage insurer, tightened its underwriting standards; but there’s only so much CMHC can do as it contends with private-sector rivals. “Please put our country’s long-term outlook ahead of short-term profitability,” Siddall implored the lenders in his letter. We’ll chase reaction.

The spot price of gold fell as low as US$1,863.15 overnight before turning higher early this morning. The choppy trading comes a day after prices fell the most since early 2013; our Bloomberg partners point to the recent run-up (off a low base) in U.S. Treasury yields as one factor. No doubt the 40-per-cent surge since mid-March that propelled prices above US$2,000/ounce also compelled some selling.

Finance minister Rod Phillips is releasing a quarterly fiscal update this morning that will reflect the impact of COVID-19 and his province’s response to the pandemic. Recall that at the time of the budget in March, the Ontario government was forecasting a $20.5-billion deficit this fiscal year – more than triple the shortfall that had been estimated prior to the virus.

Unifor will formally begin talks with the big automakers today, kick starting a process that normally unfolds with plenty of drama. One can’t help but wonder how General Motors’ high-profile retrenchment in Canada will factor into the negotiations this time around. Anita will set the scene, and we’re expecting to speak with Unifor national president Jerry Dias this afternoon.

-Sumner Redstone, a giant of the U.S. media industry, passed away yesterday at the age of 97. His empire included some of the biggest names in broadcasting and film, including CBS, Viacom and Paramount Pictures. He’s being described by the Los Angeles Times today as “a hard-charging lawyer and iron-willed deal maker who loved the limelight, the stock market and the attention of women.”

-Brooks Brothers has agreed to be acquired by Authentic Brands and Simon Property Group for US$325 million.

-The U.K. economy shrank 20.4 per cent in the second quarter, marking the deepest contraction on record, and extending the downturn that started in the first quarter when GDP fell 2.2 per cent

-Metro has reported predictably impressive gains for its fiscal third quarter, with total sales up 11.6 per cent and adjusted earnings per share up 20 per cent. The Montreal-based supermarket operator cautioned that food same-store sales growth has decelerated in the first four weeks of the current quarter (10.0 per cent, compared to 15.6 per cent in Q3).

-Docebo has arranged a bought-deal sale of 1.5 million shares at US$50 apiece. Under the offering, US$25 million will flow to the company and US$50 million will flow to certain shareholders who are reducing their stakes. The Toronto-based software-as-a-service firm went public last year (as reported in detail by Paige Ellis) and has seen its shares surge 210 per cent this year.

-Tesla shares are rising in pre-market trading after the company announced it will split its shares five-for-one. This comes after TSLA has soared 228.5 per cent so far this year.

-Bloomberg News is reporting Airbnb is planning to file to go public in “the next few weeks” as bookings pick up after earlier crashing at the onset of the pandemic.