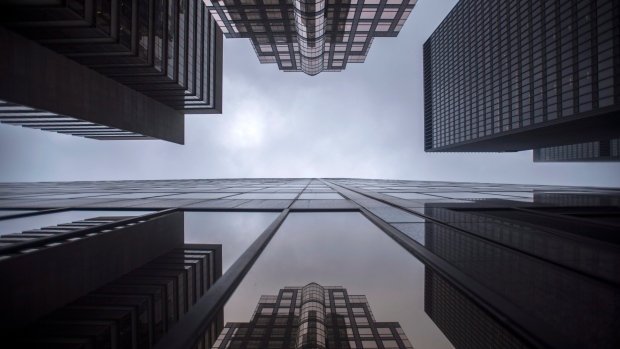 Big Six earnings season wrapped up this morning in the same way it started, with big beats powered by improved credit quality and substantial gains from capital markets operations. Paul Bagnell will have all the details that matter from the quarters reported by Toronto-Dominion and Canadian Imperial Bank of Commerce. We’re also looking forward to catching up with Bank of Nova Scotia CEO Brian Porter this afternoon on Bloomberg Markets.

TORONTO CONDO MARKET IN A FUNK

Sure, the headline on today’s housing data out of the country’s largest market shows sales surged 24.3 per cent year-over-year and prices climbed 13 per cent from a year earlier, but those figures mask COVID-19’s impact on Toronto’s once red-hot condo market – where sales inched up just 0.8 per cent year-over-year and prices fell three per cent. The local real estate board is framing it as a “somewhat of a short-term phenomenon” while holding out hope for brighter post-pandemic days when immigration picks back up. We’ll chase insight on how much worse things might get between now and then for developers and speculators.

BANK OF MOM AND DAD OPEN FOR BUSINESS

The Montreal-based engineering firm is positioning itself to ride the wave of interest in environmentally-savvy growth by announcing the purchase of Golder Associates’ holding company, Enterra Holdings, for US$1.14 billion. “The combination ideally positions WSP to capitalize on the rapidly growing ESG trends driving demand for environmental services and sustainable infrastructure development,” according to CEO Alexandre L’Heureux. To finance the deal, WSP is bringing GIC Private Limited and British Columbia Investment Management Corp. on board as backers and establishing a new $1.2-billion bank loan.

-Boeing got a big boost today (both in practical terms and in the market) as Ryanair announced a firm order to buy 75 additional 737 Max jets. Last I looked, BA shares were up more than five per cent.

-As David George-Cosh reported for BNNBloomberg.ca late last night, Evraz Steel is laying off approximately 500 staffers at its Regina operations. A spokesperson for the company told Dave this is designed to match the workforce with market demand for certain tubular products.

-After prevailing in a battle with management, Sandpiper Group has raised its stake in Artis Real Estate Investment Trust. The activist announced late yesterday it now owns 10.07 per cent of the units, up from 9.99% previously.

-3M announced a big restructuring this morning that will hit 2,900 jobs and result in up to US$300 million in charges.