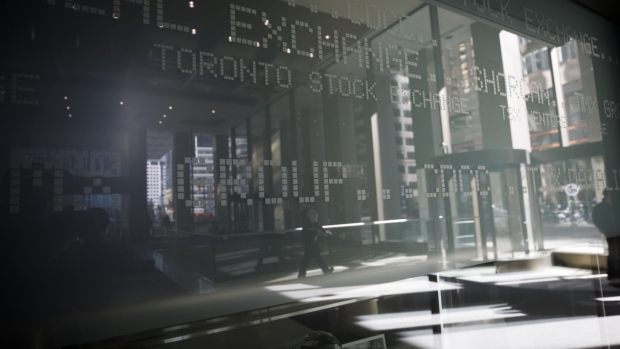 Signage for the Toronto Stock Exchange (TSX) is seen in the financial district of Toronto, Ontario, Canada, on Monday, March 16, 2020. , Bloomberg News

The S&P/TSX Composite Index enters today at the highest level since the market bottomed out in late March. And after three straight days of gains, the index is now sitting less than 300 points from an all-time high. This morning we’ll go in depth on the anatomy of the rally and discuss the outlook for Canadian stocks at 8:30 a.m. ET with veteran portfolio manager Andrew Pyle.

Work on the Trans Mountain pipeline expansion has come to a screeching halt amid unspecified worksite safety incidents that CEO Ian Anderson described in a release as “unacceptable”. As a result, construction of the project that’s so crucial to Canada’s energy sector and the economy more broadly is being suspended until Jan. 4 so that the organization and its contractors can, in Anderson’s words, “review, reset and refocus our efforts.”

Retail sales unexpectedly rose in October; according to Statistics Canada, the dollar value of activity increased 0.4 per cent in the month. That was a sharp deceleration from the 1.9 per cent surge in September. And it bears underscoring that, excluding autos, sales were flat in the month. On top of that, StatsCan's advance estimate for November indicates sales were "relatively unchanged" last month.

Emergency use authorization for Moderna’s COVID-19 vaccine could come any time now from the U.S. Food and Drug Administration after a panel of the regulator’s advisors agreed in a 20-to-nil vote that the product’s benefits outweigh its risks. The Moderna vaccine still awaits Health Canada’s go-ahead for use in this country. Meanwhile, Johnson & Johnson announced late yesterday that the Phase 3 trial for its single-dose candidate is now fully enrolled, and it expects to be able to release interim data by the end of next month. I don’t think it can be overstated just how stunning the scientific community’s collective efforts were this year. Nonetheless, the ongoing public health emergency is evident this morning as Ontario Premier Doug Ford called an emergency meeting today with officials to discuss options for his province.

-Loblaw and George Weston will be on our radar today after they announced plans to repurchase 3.27 million and 1.3 million shares, respectively, from W. Galen Weston.

-BlackBerry shares are drifting lower in pre-market trading even though the company reported a surprise adjusted profit in its fiscal third quarter and reaffirmed its revenue forecast for the year. Worth pointing out BlackBerry shares have surged almost 84 per cent since the end of October.

-FedEx's profit more than doubled in its fiscal second quarter amid booming demand for its services, but costs are rising as it aims to meet customer needs and handle COVID safety measures. Indeed, operating expenses rose 14 per cent in the latest quarter.

-Bitcoin remains on our radar; at last check, it was trading less than one per cent higher and is hovering just shy of US$23,000 per coin.

-MindBeacon has priced its initial public offering at the high end of the target range ($8.00 apiece), resulting in proceeds of $65 million for the online mental health service provider.