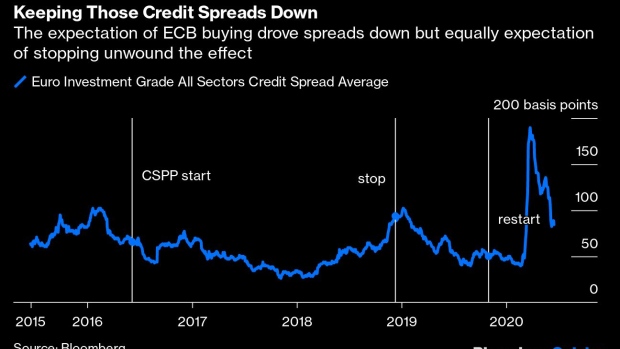 (Bloomberg Opinion) -- The U.S. Federal Reserve has started buying corporate bonds in the secondary market, but it isn’t the first of its peers to do so. The European Central Bank has been buying investment-grade corporate debt for more than four years, amassing the equivalent in euros of a $250 billion portfolio. Coincidentally, that’s how much the three-month Fed program will be able to purchase.

The chief lessons from the ECB are that it’s easier to start doing this than to stop and that the immediate benefits of these monetary tools wear off over time.

Fed Governor Jay Powell has also learned the need for clarity. By using its own eligibility index, the Fed’s decision on which bond issuers qualify should be easy to understand. This sounds like a more transparent approach than the ECB’s, which provides a lot of backward-looking information that isn’t much use for analyzing what it owns or what it will buy.

Powell’s efforts should help keep U.S. corporate bond yields in check, or push them lower, which will mean cheaper borrowing for companies and a better chance of economic recovery as America starts to emerge from the pandemic. Expect a flood of new issues. That has been the case in Europe this year, where corporate issuance is keeping pace with the usually larger U.S. market.

Getting this going will be the easy part, however. Stopping these quantitative-easing programs will be harder, as the Fed knows from previous attempts to taper its holdings of government bonds.

To see how this might work out for the U.S., the experience of the ECB’s corporate bond-buying scheme that ran between 2016 and 2018 is instructive. As investors anticipated the program’s winding up at the end of 2018, credit spreads — the difference between corporate bond yields and their benchmark — blew out again, so they were as wide as they’d been three years earlier.

So while it was nice for those companies that issued all of the debt they needed, helped by the ECB, the effects were transitory. The central bank was forced to restart its QE programs in November last year because of fears of a euro-area recession, and it has massively increased them to respond to Covid-19. The corporate program has taken a backseat to more urgent government bond buying, particularly of Italian bonds, but the ECB is steadily restoring the balance where it can.

One area where the Fed has taken the lead is buying the bonds of “fallen angels,” the companies that have dropped into the BB junk-rated category since the coronavirus first hit. ECB President Christine Lagarde may well follow Powell’s lead at some point, as it seems unfair to penalize otherwise healthy corporates, marked down through no fault of their own.

In other areas, the ECB is being bolder than the Fed. For example, the U.S. central bank will only buy corporate bonds of up to five years’ maturity, and will only take up to 10% of any company’s outstanding debt — whereas the ECB has much more flexibility in what it can buy.

This is just the Fed’s first foray into buying corporate paper, and its plans may well evolve. The real lesson from the ECB is that it’s unlikely to be a one-time deal.