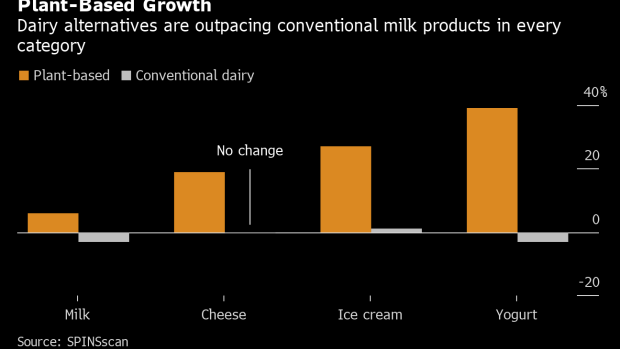 (Bloomberg) -- Summertime is the usual high season for burgers in America, only this summer saw something unprecedented. Meatless patties made from plants and designed to “bleed,” in a faithful imitation of real red meat, exploded onto restaurant menus across the nation. Impossible Foods Inc., a Silicon Valley startup, appears to have hooked a burger-loving population on vegan food.

By the end of July, Impossible said that about 10,000 restaurants—including White Castle, Red Robin and Burger King, which embarks on a nationwide rollout of Impossible products on Thursday—were serving its plant-based meat alternative, double the number of locations from April. Impossible Burgers popped up on menus as far afield as Singapore.

Yet an ever-growing list of restaurants hasn’t always made the Impossible Burger easy to find. In a survey conducted by Bloomberg News last month, more than 30% of restaurants listed as locations on Impossible’s website were not serving the burger at the time. The startup has struggled to keep up with booming consumer demand and its own breakneck expansion.

“We encourage consumers to call the restaurant in advance if they are visiting specifically for the Impossible Burger,” Impossible spokeswoman Rachel Konrad said in an email. “Because we don’t sell directly to restaurants, this is the best approach.”

Whether the shortage—which Impossible says is now over—will be a hiccup for a startup at the forefront of a revolutionary new food category or a more persistent supply-chain problem that stunts growth remains to be seen. The issue has not slowed the company’s push into thousands of new locations, including several thousand additional Burger Kings this week.

Reports of shortages first surfaced in April, shortly after the start of a regional test of the Impossible Whopper. The deal with Burger King was a coup for a product that had debuted in July 2016 on the menu of New York City’s trendy Momofuku Nishi. In less than three years, Impossible Chief Executive Officer Patrick O. Brown had moved his meatless burgers from that single restaurant to the assembly lines of one of the country’s biggest burger chains.

The Impossible expansion had reached more than 7,000 restaurants on May 14, at a time when a $300 million round of new venture-capital backing brought its valuation to $2 billion. By June, the company put the total number of Impossible Burger sellers at “more than 9,000 restaurants in every state in America—as well as Hong Kong, Singapore and Macau.”

That’s when some White Castle and Red Robin locations reported depleted supplies. While both chains were eventually restocked, temporary outages showed the risk of surging popularity combined with rapid expansion. Landing in White Castle was supposed to make plant-based burgers a fixture for the masses. What would disappearing from the menu mean?

Bloomberg’s survey in July used a database of nearly 6,000 restaurant locations on Impossible’s website at that time. The total restaurant count cited by Impossible—more than 9,000, as of last month—includes foodservice locations such as stadiums, hotels and theme parks, the company said. “We cannot track the precise number of restaurants,” Impossible’s Konrad said in an email. In a two-week period, calls by Bloomberg to 902 restaurants from that list across the U.S. and in Asia revealed widespread impact from the shortage, with many vendors reporting waits for restock from distributors.

Ten percent of restaurants in the survey told Bloomberg they had switched to a rival product from Beyond Meat Inc. “I’m not sure if we would switch back,” said Craig Charbonnet of The Po’Boy Shop in Decatur, Georgia, which opted for Beyond patties during the Impossible shortage. He said Impossible cost his shop about 25% more than burgers from Beyond.

Impossible’s supply constraints have come at a crucial moment in the rise of plant-based meats. Seemingly overnight, veggie burgers have become a sought-after status symbol that confers an image of climate consciousness. After years of placing environmental blame on cars and airplanes, some consumers are starting to focus on the role of beef in producing about 6% of total manmade greenhouse-gas emissions. The marketing pitch for Impossible and its rivals in the next generation of plant-based replacements seeks to mobilize this concern: These burgers aren’t just for vegans; they’re for everyone who wants to eat less meat, without sacrificing taste.

Demand for plant-based alternatives is expected to rise dramatically. A recent report from Barclays compared the surging appetite for vegan meat to the boom in plant-based milk, which has already taken 13% of the total category market share. Imitation meat could capture approximately 10% of the global meat market in 10 years, Barclays projects, reaching $140 billion in sales.

As companies like Impossible and Beyond expand their reach, generating demand from consumers has proven less of a challenge so far than keeping up supplies. Swedish oat milk maker Oatly went as far as to suggest competitors’ products to its customers during a supply drought, betting that it was better to keep consumers ordering another oat option than to let them forget about it.

Beyond Meat, Impossible’s biggest rival, has gone through its own shortages. Following its initial public offering—the most successful since before the 2008 recession—Beyond has answered production questions at length, promising it can take on any customer. Beyond’s share price is currently hovering around $165, up from the offering price of $25 on May 2.

Beyond has a different business strategy than Impossible, working with a network of co-packers and focusing first on grocery-store distribution before it expanded into restaurants. Impossible handles all of its production at a single manufacturing plant in Oakland, California, and distributes only to restaurants right now; the startup plans to arrive in supermarkets by September.

Last week Impossible said it would work with global food producer OSI Group to add short-term capacity to the plant and further ramp up output, which it says has already tripled between April and July. Konrad said the OSI deal “enables us to quadruple production from current rates by the end of this year.”

In the middle of July, as Impossible declared the shortage over, many restaurants contacted in the Bloomberg survey remained out of its meatless burgers. Availability varied by region. New England had the highest rate of missing Impossible meat, with as many as 65% of restaurants in Maine and Massachusetts going without the products during a 14-day period. Stocking rates were much higher in Michigan, Ohio, and Indiana, with no more than 25% of restaurants unable to source the plant burgers.

Independent restaurants were more likely than big chains to face shortages. All over the country, restaurant personnel contacted for the survey said that they were under the impression that Burger King and White Castle had bought up all the patties. Every Burger King and White Castle contacted in the survey carried Impossible Whoppers and Sliders, while 95% of Qdobas had Impossible meat and 81% of Red Robins had the burgers.

Impossible says it does not prioritize chains over independent restaurants. Konrad, the spokeswoman, said the decision is left up to distributors.

Impossible, like other meat-alternative makers, has set its sights on Asia, a region credited with introducing the world to predecessors like tofu and seitan. Last week Impossible said that sales had “more than quadrupled” on the continent. The survey found that 18% of the restaurants in Asian markets were out of Impossible products, including 7% of restaurants in the region that had never carried any at all.

Of the roughly 10% of restaurants in the survey that switched to Beyond, some planned to return to Impossible.

“People were upset,” said Onofrio Moscato, executive chef at Eventide Grille in Sea Bright, New Jersey. He said his supplier imposed a five-case-per-week limit on Impossible patties after receiving new inventory in late July. “They tried the Beyond, and it didn’t come close.”

To contact the editor responsible for this story: Aaron Rutkoff at arutkoff@bloomberg.net, Anne Riley Moffat