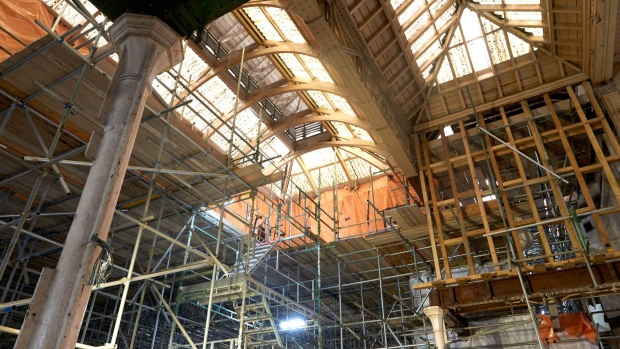 (Bloomberg) -- You know what it’s like when you’re moving. You have to let the mail people know, remember to turn off the gas and put the Roman legionary in plenty of Bubble Wrap.

They’ve had their work cut out at the Museum of London, which left its old premises at the heart of the city last weekend before a relocation across town to Smithfield, where it’s due to reopen in four years. The museum is a repository of the capital’s artifacts and treasures: Oliver Cromwell’s death mask; a handbell used in the Great Plague of 1665 by the men who took wagons round the streets crying, “Bring out your dead!”; the bass guitar that Paul Simonon is smashing on the cover of the Clash’s London Calling.

I once wrote a book about exploring underground London, and it wouldn’t have been possible without the resources and expert staff of the museum. I made a sentimental return to its old home near the Barbican a few days ago, just before it closed. In the galleries, I bumped into old friends and favorites. There was that legionary, for a start, carved from stone in the first or second century and ignominiously recycled as building material in a tower of the city wall until archaeologists unearthed him. There was an exquisite art nouveau elevator from Selfridges, installed at the department store on Oxford Street in 1928.

The museum has been one of London’s hidden gems—much to the chagrin of its staff and friends. Director Sharon Ament told me that as many as a million people a year visited before the pandemic (compare that with the British Museum’s 6 million visitors in 2018-19), but the footfall would’ve been greater if the museum were more user-friendly. “It’s been extremely difficult to find us,” Ament says. “Nobody just fell into this museum, no passersby. The day it launched in 1974, one of the newspapers said the queen would be opening the Museum of London—‘if she can find it.’”

It was situated on a traffic roundabout, in a bastion that looks like a low circular fort known as a Martello tower. (Another outdated structure: The Martello towers went up on the coastline of England during the French Revolutionary wars of the 19th century, and several can still be found there.)

The museum overlooked a stretch of the city’s old Roman wall, still formidably upright and serviceable despite the weathering of centuries. To this extent, at least, the city’s warehouse of relics and keepsakes was in the perfect place. In Athens the principal museum is suspended on stilts over the remains of the early city and within sight of the World Heritage Site of the Acropolis. It’s absolutely the right location for it, as it puts visitors at the heart of the ancient Greek capital and its absorbing history.

Unfortunately for London’s museum, the oldest part of the metropolis is also the traditional financial district, and not all City institutions are sentimental about history. The museum stood on very desirable real estate. It was hoped that it would be replaced by a world-class concert hall; the leading British conductor Sir Simon Rattle was among the cheerleaders for that project. But it’s fallen by the wayside to be replaced by a scheme involving three office blocks, up to 17 stories high, co-designed by the New York studio Diller Scofidio + Renfro, which was behind the acclaimed revamping of the High Line in Manhattan. People who live near the old museum have joined environmental campaigners in urging the City of London that the proper, green option is to refurbish the building and a neighboring high-rise instead.

Whatever the fate of the old premises, Londoners and tourists can look forward to visiting the museum in its new surroundings. We’re promised it will have more space when it goes up on the site of London’s old meat market. The new location includes a basement depot that was served by the first underground railway anywhere in the world. Visitors will be able to watch Tube trains pulling into Farringdon Station from the subterranean galleries. It’s not the same blast from the past as a genuine Roman wall, perhaps, but to an underground aficionado like me, it’s worth the price of admission by itself.

The relocated Museum of London will cost £337 million ($409 million). Its landlord, the City of London Corp., has shown its commitment to the redevelopment by promising £200 million, while the mayor will contribute £70 million. The City’s planning officers have welcomed what they call “the sensitive revival of the market buildings … securing a strategic development that offers significant social, economic and environmental benefits including job creation, tourism and income generation.” According to the corporation, the museum is set to be “a visitor attraction that is accessible and inclusive for all, telling the story of London.”

On that point, the museum promises that in its new surroundings, “there will be a particular focus on lives that previously have been too little-represented,” Ament says. “We’re always curious to find out about the people in London, their lived experiences. For example, I don’t know what it was like to be a docker in the East End, but I can find out from someone who was. We’re always seeking first-person testimonies.” In effect, the museum is starting over in Smithfield. “We’re constantly rewriting history, using new phrases and terms for things,” she continues. “I don’t know why people get upset about this. It’s just the ongoing process of history.”

On the walls near Ament’s old office was a line of Henry James’s, written in 1865. He said of London: “It is not a pleasant place. It is not agreeable or cheerful or easy or exempt from reproach. It is only magnificent.” Visitors to the museum’s new home may have a sense of what he meant in the depot beneath the old meat market, where porters known as “bummarees” were hauling sides of beef off that subterranean railway at around the same time James was writing.

Personally, I can’t wait to see how the old cabinet of curiosities fits into a different corner of the city. When a man is tired of the Museum of London, he’s tired of life.