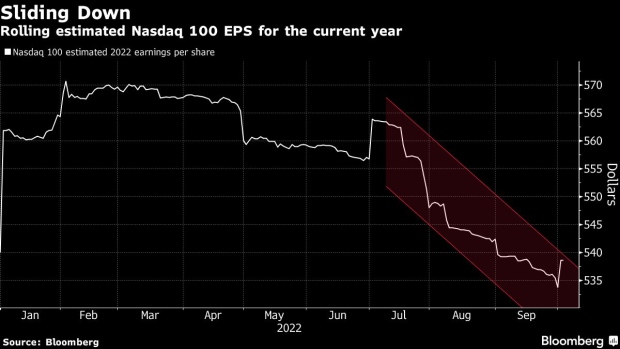 (Bloomberg) -- Investors hoping that third quarter earnings will be strong enough to reverse this year’s steady selloff in technology stocks should brace for the prospect of weak company outlooks causing further pain.

That’s the view from pessimists who say the mini-rally in the Nasdaq 100 Index that kicked off this week will peter out. Headwinds including higher interest rates, a strong dollar, and slower economic growth are likely to result in cautious commentary from companies as they roll out results over the next month.

The Nasdaq 100 Index was little changed on Thursday.

That dynamic applies to stocks as a whole, but its especially a problem for tech shares, because earnings for the industry are now forecast to decline in the third quarter, unlike the rest of the market.

While third quarter earnings may beat already-lowered estimates, as they usually do, that will be no consolation if analysts have to take an ax to 2022 and 2023 estimates again. And it will undermine the argument that the year-to-date rout has generated some bargains.

“Consensus estimates need to come down more, and while this earnings season may be better than expected, as is typical, outlooks will hurt,” said Rick Bensignor, chief executive officer at Bensignor Investment Strategies. “If we get a major negative outlook, recent gains will disappear in a flash.”

Micron Technology Inc. recently gave a weak sales forecast, as did fellow chipmaker Nvidia Corp.. Outside of the tech sector, warnings from bellwether stocks like FedEx Corp. and Nike Inc. have painted a grim picture of business conditions going into next year.

Earnings for the tech sector are expected to fall 6.5% in the third quarter, according to data compiled by Bloomberg Intelligence. In late June, the consensus had been for growth of about 3%. There is a similar trend for the communications services sector, which includes companies like Alphabet Inc. and Meta Platforms Inc.; the consensus is for earnings there to fall 10.4%, compared with the 0.2% growth expected in late June. Full-year estimates for both groups also have dropped for 2022 and 2023.

For the overall S&P 500, the consensus for third quarter earnings has dropped from 10.3% growth in late June to a 2.9% increase now.

Tech and growth stocks “may not be as defensive as some investors expect,” according to BofA Global Research, which notes that earnings for Nasdaq companies continue to weaken compared with those for S&P 500 members.

The tech-heavy Nasdaq 100 is down 29% this year, finishing last week at the lowest since September 2020, with much of the weakness related to aggressive moves by central banks to combat inflation.

The Nasdaq 100 trades at 20 times estimated earnings, in line with its 10-year average. However, falling estimates would lower the denominator in the price-to-earnings ratio, making equities look more expensive.

Michael Wilson, chief US equity strategist at Morgan Stanley, said the likelihood of more estimate cuts ahead suggests that valuations aren’t reflecting the reality of the economic environment, and that recent optimism about the Fed relaxing its hawkish stance was premature.

“The light at the end of the tunnel you might see if that happens is actually the freight train of the oncoming earnings recession that the Fed cannot stop at this point,” he wrote. Even if the Fed were to pivot toward a more accommodative policy stance, “the timing is uncertain and won’t change the trajectory of earnings estimates, our primary concern for stocks at this point.”

Meta Platforms shares have collapsed 59% this year, with the drop reducing its influence in the S&P 500 to a multi-year low. The Facebook parent now accounts for less than 1% of the benchmark, its lowest since 2015 and down from a 2021 peak of 2.4%. The weighting is roughly equal with that of chipmaker Nvidia and financial bellwether JPMorgan Chase & Co. Meanwhile, Apple Inc. remains the biggest company in the benchmark index by far at 6.9%.